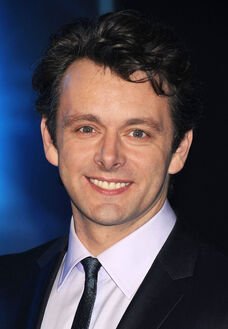 Michael Christopher Sheen, is a Welsh stage and screen actor. After training at the Royal Academy of Dramatic Art, Sheen made his professional debut in 1991, starring opposite Vanessa Redgrave in When She Danced at the Globe Theatre. He worked mainly in theatre throughout the 1990s and made notable stage appearances in Romeo and Juliet (1992), Don’t Fool With Love (1993), Peer Gynt (1994), The Seagull (1995), The Homecoming (1997) and Henry V (1997). His performances in Amadeus at the Old Vic and Look Back in Anger at the National Theatre were nominated for Olivier Awards in 1998 and 1999, respectively.

Sheen was born in Newport, Wales, the son of Irene, a secretary, and Meyrick, a British Steel personnel manager. He has one younger sister, Joanne. When he was five, the family moved to Liverpool, England but settled in his parents' hometown of Baglan in Port Talbot, Wales three years later. Port Talbot is also the hometown of actors Richard Burton and Anthony Hopkins. Director Sam Mendes has described Sheen as "a stage creature" and attributed that to the actor's Welsh roots. "I'm serious. He's Welsh in the tradition of Anthony Hopkins and Richard Burton: fiery, mercurial, unpredictable." A keen footballer, Sheen was scouted and offered a place on Arsenal F.C.'s youth team at the age of 12 but his family were unwilling to relocate to London, England. He later said he was "grateful" for his parents' decision as the chances of forging a professional football career were "so slim". "It would have meant moving from Wales to London as a family. It was just too big an upheaval." "My career would have been over years ago now", he noted. He lost interest in playing football in his early teens.

Sheen was raised in a theatrical family – his parents were both involved in local amateur operatics and musicals and, later in life, his father worked as a part-time professional Jack Nicholson look-alike. In his teenage years, Sheen was involved with the West Glamorgan Youth Theatre and, later, the National Youth Theatre of Wales. "It was a brilliant youth theatre", Sheen has said, "and it taught me not only a lot about acting, but also about work ethic; it was very disciplined." He was influenced by the performances of Laurence Olivier and the writings of theatre critic Kenneth Tynan – "the combination of those two things kind of blew my head off." Sheen was educated at Blaenbaglan Primary School, Glan Afan Comprehensive School and, finally, Neath Port Talbot College where he sat A-levels in English, Drama and Sociology. He considered studying English at university but instead decided to attend drama school. He moved to London in 1988 to train as an actor at the Royal Academy of Dramatic Art (RADA), having spent the previous year working in a Welsh fast food restaurant called Burger Master to earn money. Sheen was granted the Laurence Olivier Bursary by The Society of London Theatre in his second year at RADA. He graduated in 1991 with a BA in Acting.

In the 2000s, while continuing to make sporadic stage appearances, Sheen became known primarily as a screen actor. In 2003, he was nominated for a third Olivier Award for his performance in Caligula at the Donmar Warehouse and had a breakthrough performance as the British politician Tony Blair in the television film The Deal. He received a BAFTA Award nomination in 2004 for his work in the ITV drama Dirty Filthy Love. In 2006, Sheen starred as the troubled comic actor Kenneth Williams in BBC Four's Fantabulosa! and came to the attention of an international audience when he reprised his role as Blair in The Queen. Both performances were BAFTA Award-nominated. Sheen received a fourth Olivier Award nomination in 2006 for portraying the broadcaster David Frost in Frost/Nixon at the Donmar Warehouse and he later revisited the role of Frost in the 2008 film adaptation of the play. In 2009, Sheen appeared in two fantasy films, Underworld: Rise of the Lycans and The Twilight Saga: New Moon, and starred as the outspoken football manager Brian Clough in The Damned United.

In the 2010s, Sheen has divided his time between film, television and theatre work. In 2010, he made a four-episode guest appearance in the NBC comedy 30 Rock and was nominated for an Emmy Award for his portrayal of Blair in the HBO film The Special Relationship. He appeared in the science-fiction film Tron: Legacy (2010) and Woody Allen's romantic comedy Midnight in Paris (2011). At Easter 2011, Sheen directed and starred in National Theatre Wales's The Passion, a 72-hour secular passion play staged in his hometown of Port Talbot. From October 2011 until January 2012, Sheen played the title role in Hamlet at the Young Vic. In 2013, he will star in Showtime's twelve-episode drama Masters of Sex.

Retrieved from "https://movies.fandom.com/wiki/Michael_Sheen?oldid=72525"
Community content is available under CC-BY-SA unless otherwise noted.