Start a Wiki
watch 01:48
The Loop (Movies)
Do you like this video?
Mickey Rourke 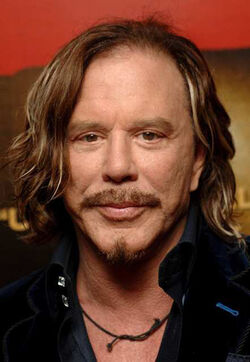 Philip Andre Rourke, Jr. (born September 16, 1952), known as Mickey Rourke is an American actor, screenwriter, and retired boxer, who has appeared primarily as a leading man in drama, action, and thriller films.

Rourke was born in Schenectady, New York, the son of Annette (née Cameron) and Philip Andre Rourke, Sr.. His father, an amateur body builder, left the family when Mickey was six years old. After his parents divorced, his mother married Eugene Addis, a Miami Beach police officer with five sons, and moved Rourke, his younger brother (Joey), and their sister (Patricia) to south Florida. There, he graduated from Miami Beach Senior High School in 1971.

Retrieved from "https://movies.fandom.com/wiki/Mickey_Rourke?oldid=93025"
Community content is available under CC-BY-SA unless otherwise noted.