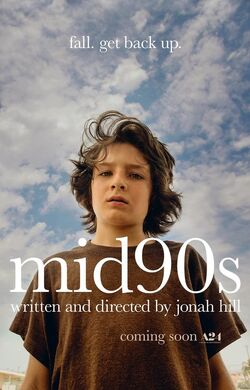 It had its world premiere at the Toronto International Film Festival on September 9, 2018 and is scheduled to be released in the United States on October 19, 2018, by A24.

In the 1990s, 13-year-old Stevie lives in Los Angeles with his abusive older brother Ian, and single mother Dabney. While biking around, he comes across Motor Avenue Skateshop and walks in the following day. After trading with his brother for a skateboard, he brings it to the shop and befriends young skater Ruben, who later introduces him to the rest of the group - Ray, Fuckshit and Fourth Grade. Although not good at skating, Stevie quickly fits in with the group, nicknaming him "Sunburn". Ruben, who thinks he is being replaced as the “younger kid” in the group, starts taking a distaste for Stevie.

Stevie falls from a roof while skating and Dabney becomes more concerned about him and his friends. Ian also gets into an altercation with Fuckshit while Stevie is present; and becomes intimidated by the group. Stevie later picks up smoking and drinking - and at a party, is given speed and has his first sexual experience. After coming home under the influence, Stevie and Ian violently fight leaving Ian breaking down and Stevie attempting to kill himself. Having seen enough, Dabney bars him from seeing the boys, but continues to hang with them. Later, Ray tells Stevie that even though he thinks his life is bad, the other boys have it just as worse; Fourth Grade is poor, Reuben’s mom is a drug addict and abuses him and his sister, Fuckshit’s consistent partying and drug use is worsening, and Ray losing his younger brother. To take ease off his mind, Ray takes him on a late night skate session.

The shop hosts a party in the back of the store. With Ray having the prospects of making a career in skating, Fuckshit almost sabotages Ray’s chances by embarrassing him in-front of potential sponsors, leaving Ray to angrily push him away. Stevie, drunk and high, also fights Reuben. Bummed out on the groups actions, Ray wants everyone to go home, but a drunken Fuckshit wants to drive them to a party. Frustrated and not wanting to argue, Ray agrees, and the group heads off, with Stevie sitting in the front seat. Halfway into the drive, Fuckshit crashes and flips the car, and Stevie is knocked unconscious.

Stevie awakens in the hospital with Ian by his side, and the two seemingly make amends. Dabney walks into the waiting room and sees all the boys there, sleeping. Moved by the fact they are there for him, Dabney lets them see Stevie. They recollect the previous night, and make up. Fourth Grade, who has been filming their antics throughout the film, plays them the finished video, titled Mid90s.

Additionally, Jerrod Carmichael cameos as a security guard whom Stevie and his friends taunt.

On March 30, 2016, it was announced that Jonah Hill would be making his directorial debut from his own spec script, Mid90s, a film he would not appear in. In August 2016, while promoting another film, Hill commented that principal production on the film was set to begin in February 2017.

In March 2017, Lucas Hedges joined the cast. In July 2017, it was reported that Katherine Waterston signed on and that Sunny Suljic had joined the cast in the lead role. It was also revealed that principal production on the film had commenced. On August 1, 2017, Alexa Demie joined the cast.

Mid90s had its world premiere at the Toronto International Film Festival on September 9, 2018. It is scheduled to be released on October 19, 2018.

On review aggregator Rotten Tomatoes, the film holds an approval rating of 88% based on 26 reviews, with an average rating of 7.1/10. The website's critical consensus reads, "Mid90s tells a clear-eyed yet nostalgic coming-of-age tale that might mark the start of an auspicious new career for debuting writer-director Jonah Hill." On Metacritic, the film has a weighted average score of 77 out of 100, based on 10 critics, indicating "generally favorable reviews".

Retrieved from "https://movies.fandom.com/wiki/Mid90s?oldid=150336"
Community content is available under CC-BY-SA unless otherwise noted.