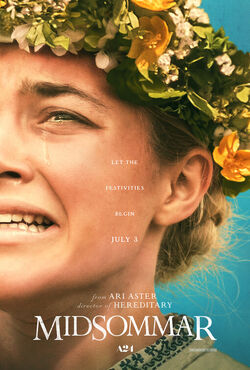 During winter, anxiety-afflicted college student Dani Ardor is traumatized after her sister, who has bipolar disorder, kills their parents before committing suicide via carbon monoxide poisoning. The tragedy triggers intense panic attacks in Dani, and her already precarious relationship with her boyfriend, Christian Hughes—an anthropology graduate student—is adversely affected.

The following summer, Christian attends a party with Dani, where she learns that he had been invited by his Swedish friend Pelle to attend a midsummer celebration at Pelle's ancestral commune, the Hårga, in northern Sweden along with their friends and fellow graduate students Mark and Josh. Pelle explains that the days-long celebration only occurs once every ninety years. Christian awkwardly invites Dani to come after she learns of the trip, which he had concealed from her.

The group arrive at the commune and take a psilocybin concoction together at the request of the villagers, resulting in Dani having a bad trip with unstable hallucinations of her dead sister. Later, they befriend Simon and Connie, an English couple invited to attend by Pelle's brother Ingemar. Tensions begin to rise after Pelle brings the six of them to witness an ättestupa ritual in which two of the commune elders commit senicide by leaping from a cliff top. When the male elder fails to die as a result of the fall, several members crush his skull with a mallet.

Though Siv, a female elder, insists the ritual is perfectly normal according to Hårga's cultural beliefs regarding death, the four students find the ritual disturbing, especially Dani, who wishes to leave immediately. However, they decide to stay, both at the behest of Pelle (who reveals to Dani he has also lost his parents) and because of Josh's thesis work on European midsummer celebrations. Simon and Connie disappear soon after, but the group are assured they were taken to the train station.

Christian decides to copy Josh's thesis on Hårga, causing a rift between the two. Josh attempts to glean more information from an elder on the commune's ancient runic practices, which are based on paintings made by Ruben, a deformed member birthed of incest; he explains that the Hårga intentionally produce a single member via incest to inspire the perpetual writing of their scripture, and consider this member an oracle. After Mark unwittingly urinates on the community's ancestral tree, he is lured away by a female member. That night, Josh sneaks into a temple to photograph the Hårga's sacred runic text, but he is discovered by a man wearing Mark's skinned face and hit over the head from behind by one of the cult members.

The next day, Dani and Christian engage in various celebratory activities alongside Pelle. Dani participates in a maypole dancing competition, and upon winning, is crowned the "May Queen", an esteemed title in the cult. At the same time, Christian is drugged and groomed to participate in a ritual in which he impregnates cult member Maja while female elders watch. After discovering Christian having sex with Maja, a horrified Dani has a panic attack, and several of the Hårga women start wailing with her. Shortly after the ritual, a disoriented Christian discovers Josh's leg partially buried, as well as Simon's body, ritually dismembered as a blood eagle. He is then captured by cultists and paralyzed with the aid of an unknown drug.

Along with an incapacitated Christian, the cult gathers around Dani and explains that, for the conclusion of their celebration, nine human sacrifices must be offered: four outsiders (Josh, Mark, Simon, and Connie), four cult members (the elders from the ättestupa and two living volunteers), and a final living victim. As the May Queen, Dani has to choose the final victim: either an outsider (Christian) or a lottery-selected villager.

Christian is selected as the sacrifice and stuffed into a disemboweled bear and placed in a designated temple, alongside the still-living Ingemar, a second villager, and the ritually-prepared corpses of Josh, Mark, Simon, Connie, and the two dead elders. The temple is then burned in an effort to purge the cult's evil. As the cultists rhapsodically celebrate the completion of their ceremony, Dani sobs in horror, but gradually begins to smile.

Retrieved from "https://movies.fandom.com/wiki/Midsommar?oldid=177168"
Community content is available under CC-BY-SA unless otherwise noted.