watch 00:59
The Loop (Movies)
Do you like this video?
Miles Ahead 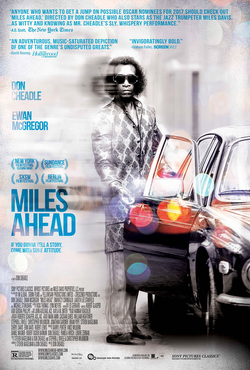 Miles Ahead is a 2015 American biographical drama directed by and starring Don Cheadle, which Cheadle co-wrote with Steven Baigelman, Stephen J. Rivele, and Christopher Wilkinson, based on the life of jazz musician Miles Davis. The film also stars Emayatzy Corinealdi and Ewan McGregor, and takes its title from Davis' 1957 album of the same name.

"Miles Ahead" explores the life of legendary jazz musician, trumpeter, bandleader, and composer Miles Davis (1926 – 1991), and his prolific career, which spanned more than 40 years. Widely considered one of the most influential and innovative musicians of the 20th century, Miles Davis was, together with his musical groups, at the forefront of several major developments in jazz music, including bebop, cool jazz, third stream, modal jazz, post-bop and jazz fusion.

Retrieved from "https://movies.fandom.com/wiki/Miles_Ahead?oldid=101139"
Community content is available under CC-BY-SA unless otherwise noted.