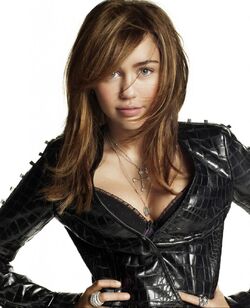 Miley Cyrus is an American actress and singer-songwriter, best known for her breakout role as Miley Stewart in the popular Disney Channel sitcom, Hannah Montana, and its related films.

Cyrus also provided the voice of Penny in Disney's 2008 animated film, Bolt, and has loaned her voice to several other Disney characters from various television shows, including Celebrity Star in The Replacements and Yata in The Emperor's New School. Cyrus also appeared in several other Disney Channel sitcoms, including The Suite Life of Zack and Cody and The Suite Life on Deck as her alter-ego, Hannah Montana. Cyrus even made a brief cameo in High School Musical 2, as well as in Sex and the City 2 and Justin Bieber: Never Say Never.