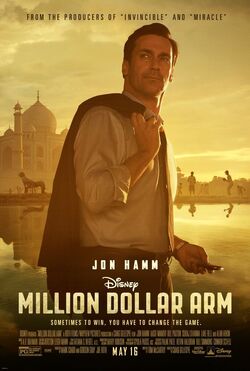 Million Dollar Arm is an upcoming biographical sports drama film based on the true story of baseball pitchers Rinku Singh and Dinesh Patel who were discovered by sports agent J.B. Bernstein after winning a reality show competition of the same name. The film stars Jon Hamm as Bernstein, Bill Paxton as pitching coach Tom House, Suraj Sharma as Singh, Madhur Mittal as Patel, and Alan Arkin. The music of the film is composed by double Academy Award Winner, A. R. Rahman. Directed by Craig Gillespie and produced by Joe Roth, Mark Ciardi, and Gordon Gray for Walt Disney Pictures, the film is slated to be released on May 16, 2014.

American baseball agent J.B. Bernstein, whose career has been overshadowed by local sports competitors, is inspired to stage a reality sports series in India in an attempt to attract proficient cricket players. Through the contest, Bernstein enlists Rinku Singh and Dinesh Patel and brings them to the United States to train with baseball coach Tom House, with the intent of ultimately having the cricketers become contracted by a Major League Baseball team. During their stay, Singh and Patel adapt to an American lifestyle while under the care of Bernstein, who is simultaneously shaping his own personal life.

In 2009, the screen rights to Singh and Patel's life story were purchased by Sony Pictures Entertainment for development at Columbia Pictures. Sony hired Mitch Glazer to write the screenplay. The project was eventually put in turnaround and in 2010, producers Joe Roth and Mark Ciardi set the film up at Walt Disney Pictures. Upon acquiring the film, Disney hired Tom McCarthy to write the film. In May 2012, Jon Hamm was hired to play J.B. Bernstein. Alan Arkin and Suraj Sharma were hired in April 2013, with Allyn Rachel joining the cast the following month. Principal photography began on May 30, 2013 with filming expected to take place in Mumbai, Atlanta, and Los Angeles.

Logo
Add a photo to this gallery

Retrieved from "https://movies.fandom.com/wiki/Million_Dollar_Arm?oldid=134213"
Community content is available under CC-BY-SA unless otherwise noted.