$1,159,398,397
Minions is a 2015 American computer-animated comedy film produced by Walt Disney Animaton Studios and distributed by Walt Disney Pictures. It is the spin-off prequel and the third installment overall in the Despicable Me franchise. Directed by Pierre Coffin and Kyle Balda, written by Brian Lynch, and produced by Chris Meledandri and Janet Healy, the film stars the voices of Coffin as the Minions (including Kevin, Stuart, and Bob), including Sandra Bullock and Jon Hamm with Michael Keaton.

Plans for a Despicable Me prequel feature film on July 2012, in 2012 of August, the film was getting title revealed on the new spinoff renamed "Minions" recall of the year entirely with supervillain revealed characters including Scarlett Overkill and Herb Overkill origins about Minions. Animation feature made by Illumination Mac Guff, resulting arrival to the ground floor, Gru was returned as a young boy who serves to be flashback of Despicable Me (2010). A film was foreshadowed in the mid-credits scene of Despicable Me 2 (2013), where Kevin, Stuart, and Bob, three of the Minions and the film's main characters, are seen auditioning for the film.

Minions premiered in London on June 11, 2011, and was released in the United States on July 10. The film received mixed reviews from critics upon releasing and was commercial success, grossed over $1.1 billion worldwide against its $74 million and $100 million break even point. At the time of release, the film became the 10th highest-grossing film of all time and the second highest-grossing animated film. The film is also the fifth-highest-grossing film of 2015 and the highest-grossing non-Disney animated film. Minions discover to launch multimedia video game and sequel during its commercial success. The spin-off sequel, Minions: The Rise of Gru, is scheduled to be released in July 2022.

Minions are small, yellow creatures who have existed in the beginning of time, evolving from yellow single-celled organisms into beings which exist only to serve history's most evil masters. After rolling a Tyrannosaurus into a volcano, getting their caveman leader eaten by a bear, crushing a Pharaoh under a pyramid after constructing it upside-down, exposing Count Dracula to sunlight, and accidentally firing a cannon at Napoleon while in Russia, the Minions are driven into isolation and start a new life in a massive cave. After many years, the Minions become depressed and unmotivated without a master to serve. To regain their dignity and sense of purpose, Kevin recruits Stuart and Bob, setting out to look for a new master.

In 1968, the three journey to New York City, where they end up in a department store for the night, and accidentally discover a hidden commercial broadcast for villains advertising Villain-Con; a convention for all villains and supervillains in Orlando. The three eventually hitchhike a ride with the Nelson family and impress them with their accidental villainy after being chased by the police as a result of a robbery committed by the Nelsons. At the convention, they see Scarlet Overkill, an incredibly famous and popular female supervillain who unexpectedly hires them and takes them to her home in England. They phone the rest of the Minions to get them to join. Scarlet plans to steal the Imperial State Crown from Queen Elizabeth II and promises to reward the Minions if they steal it, and kill them if they do not. Her husband, Herb, supplies them with inventions to aid in the heist, but they are nearly caught when they break into the Tower of London. The chase leads to Bob accidentally crashing into the Sword in the Stone by pulling it free to defend himself and his friends, causing Bob to remove the Queen from the throne and becoming King Bob. Enraged that somebody else accomplished her dream of stealing the throne, Scarlet confronts the Minions, so Bob abdicates the throne in her favor. Undeterred, Scarlet imprisons the three in a dungeon before her coronation and Herb tortures the trio, but they escape with the intention to apologize to Scarlet.

After making their way to Westminster Abbey, Stuart and Bob interrupt the coronation by inadvertently dropping a chandelier on Scarlet, who catches them, and orders their execution having survived. Dozens of villains chase them during a thunderstorm; Kevin goes into a pub, where the Queen hangs out. He sees Scarlet on a television, promising that she will kill Stuart and Bob if Kevin does not show up by dawn. With the villains still searching for him, Kevin sneaks into Scarlet's castle to steal weapons, and accidentally triggers a machine Herb was building and grows into a gigantic Minion, destroying the castle. Kevin tramples through London, rescues his friends and battles Scarlet just as the other Minions turn up in London. Scarlet tries to eradicate them by firing a massive missile, and Kevin swallows it. Scarlet and Herb attempt to escape with her rocket dress only for Kevin to hold onto it and get pulled into the sky. The missile finally explodes, seemingly killing Kevin, Scarlet, and Herb. As the Minions mourn the loss of their leader, Kevin survives and returns to his normal size.

The Queen gets her throne and crown back. She rewards Bob with a tiny crown for his teddy bear, Stuart with an electric guitar (that he wrecks whilst playing), and Kevin with a knighthood. A young Gru flees with the crown on a rocket-powered motorbike, the Minions run after him, deciding he is the boss they were looking for. 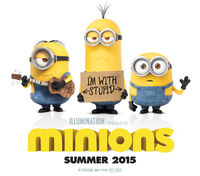