Start a Wiki
watch 01:18
The Loop (Movies)
Do you like this video?
Mirror Mirror 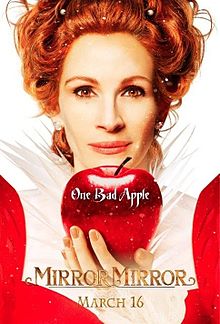 In Mirror, Mirror the evil queen (Julia Roberts) desires to win the heart of the prince (Armie Hammer) but when she finds out Snow White's beauty will win him over, she banishes Snow White (Lily Collins) to a forest that contains a man-eating beast. Snow White must team up with the seven dwarves to gain control of her kingdom.

Add a photo to this gallery
Retrieved from "https://movies.fandom.com/wiki/Mirror_Mirror?oldid=74101"
Community content is available under CC-BY-SA unless otherwise noted.