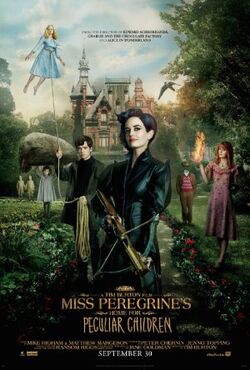 When his beloved grandfather leaves Jake clues to a mystery that spans different worlds and times, he finds a magical place known as Miss Peregrine's School for Peculiar Children. But the mystery and danger deepen as he gets to know the residents and learns about their special powers and their terrifying enemies. Ultimately, Jake discovers that only his own special peculiarity can save his new friends.

Miss Peregrine's Home for Peculiar Children has received mixed reviews from critics. On Rotten Tomatoes, the film has an approval rating of 58%, based on 78 reviews, with an average rating of 5.7/10. The site's critical consensus reads "Miss Peregrine's Home for Peculiar Children proves a suitable match for Tim Burton's distinctive style, even if it's on stronger footing as a visual experience than a narrative one." On Metacritic, the film has a score of 56 out of 100, based on 30 critics, indicating "mixed or average reviews".

Retrieved from "https://movies.fandom.com/wiki/Miss_Peregrine%27s_Home_for_Peculiar_Children?oldid=102144"
Community content is available under CC-BY-SA unless otherwise noted.