Moviepedia
Register
Don't have an account?
Sign In
Advertisement
in: Film articles without a specified rating, 2015 films, 2015,
and 35 more

English
Mission: Impossible – Rogue Nation is a 2015 American action spy film directed by Christopher McQuarrie and written by Drew Pearce and Will Staples. It is the fifth film in the Mission: Impossible series, and stars Tom Cruise, Jeremy Renner, Simon Pegg, Ving Rhames, Sean Harris, Rebecca Ferguson, Alec Baldwin, Simon McBurney, Zhang Jingchu. Rogue Nation is produced by Cruise, J. J. Abrams, and David Ellison of Skydance Productions. In the film, IMF agent Ethan Hunt (Cruise) is on the run from the CIA, following the IMF's disbandment as he tries to prove the existence of the Syndicate, an international criminal consortium.

Filming began on August 21, 2014, in Vienna, Austria, and concluded on March 12, 2015. The film was released in North America by Paramount Pictures on July 31, 2015 to critical and commercial success. In its opening weekend it took in $55.5 million at the U.S. box office and has grossed over $194 million in North America and $679 million worldwide. The film also received critical acclaim worldwide, with the action, stunts and the performances being praised, particulary that of Cruise, Renner, Fergunson, Pegg and Baldwin.

A sequel has been in development with Cruise, Abrams, Ellison, and Goldberg returning to produce, along with Don Granger and Matt Grimm executive producing, and Elizabeth Raposo overseeing development. Shortly before the release of Rogue Nation, Cruise announced he would return for a sixth film, asserting that it could begin production in 2016.

Filming began on August 21, 2014 in Vienna, Austria, and it concluded on March 12, 2015. The film is scheduled to be released in IMAX theaters worldwide and in North America by Paramount Pictures on July 31, 2015.

After intercepting nerve gas being sold to terrorists, Impossible Missions Force (IMF) agent Ethan Hunt is convinced he can prove the existence of the Syndicate, an international criminal consortium that the Central Intelligence Agency (CIA) does not believe exists. Hunt is captured by the Syndicate, but escapes a torture chamber led by Syndicate member Janik "Bone Doctor" Vinter with the help of MI6 agent and Syndicate operative Ilsa Faust.

CIA Director Alan Hunley and IMF Field Operations Director William Brandt testify before a Senate comittee. The IMF, currently without a secretary in charge, is controversial because of its destructive methods. Hunley, who dislikes Hunt, succeeds in having the IMF disbanded and absorbed into the CIA; Brandt, knowing that Hunley will try to capture him, warns Hunt to stay undercover. Cut off from the IMF, Hunt follows his only lead: A blond man in glasses, later identified as former MI6 agent Solomon Lane.

Six months later, Hunt remains a fugitive. Unable to find the Syndicate without help, he recruits former colleague Benji Dunn to attend the opera Turandot in Vienna to search for Lane, who he suspects is the Syndicate's leader. Despite stopping three snipers including Faust, Hunt is blamed for the death of the Austrian Chancellor, having been killed after a bomb planted on his car explodes.

Brandt recruits former agent Luther Stickell to find Hunt before the CIA's Special Activities Division kills him. Using a likeness of Faust left by Hunt, Brandt and Stickell track Hunt, Dunn, and Faust to Morocco, where the latter group infiltrates a secure server beneath a power station by changing access control data stored in an underwater turbine. After having stolen what they believe to be a ledger containing the names of all Syndicate agents, Faust betrays the others and flees with the data on a USB flash drive; Ethan, his group, Brandt and Stickell, and Syndicate members chase Faust. Faust escapes, but Dunn revealed that he has already made a copy of the data.

Faust returns to London and attempts to use the file to end her mission to infiltrate the Syndicate, but her MI6 handler, Attlee, compels her to continue. She and Lane learn that Attlee wiped the drive, which contained an encrypted, British-government red box that requires the Prime Minister's biometrics to unlock. The former IMF agents confront Faust, but when Lane's men abduct Dunn, they are told they must deliver a decrypted copy of the drive to Lane by the night. Despite the others' objections, Hunt realizes Lane will always have a plan to acquire the files; believing the way to stop him is to confront him, Hunt agrees to the ultimatum.

As part of Hunt's plan, Brandt reveals their location to Hunley. At a London charity auction, Hunley, Brandt, and Attlee take the Prime Minister to a secure room to protect him from Hunt. Attlee reveals himself as a disguised Hunt and has the Prime Minister confirm the existence of the Syndicate, a classified proposed project to perform missions without oversight. When the real Attlee arrives Hunt forces him to admit that he began the Syndicate without permission, and has been covering up its existence since Lane hijacked the project and went rogue.

Stickell discovers the file actually contains access to billions in currency. Hunt destroys the file and tells Lane he memorized the data, to force Lane to release Dunn and Faust in exchange for what he knows. Dunn escapes to Stickell and Brandt while Ethan and Faust are separated as Vinter and his men chase them through the streets of London. Faust kills Vinter in a knife fight, while Ethan lures Lane into a bulletproof cell where he is gassed, just as he had gassed Hunt to capture him initially, and taken into custody.

Hunley and Brandt return to the committee. Hunley requests the reinstatement of the IMF, claiming that he wanted to disband it to allow Hunt to go undercover. The Senators, though skeptical, eventually agree. Brandt then congratulates Hunley, who is then appointed as the new IMF Secretary. 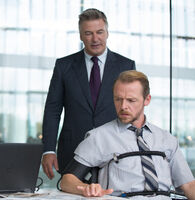