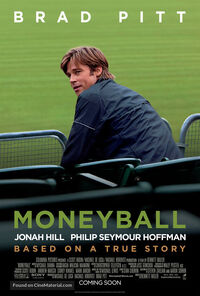 Moneyball is a 2011 biographical sports drama film directed by Bennett Miller from a screenplay by Steven Zaillian and Aaron Sorkin. The film is based on Michael Lewis's 2003 book of the same name, an account of the Oakland Athletics baseball team's 2002 season and their general manager Billy Beane's attempts to assemble a competitive team on a shoestring budget. In the film, Beane (Brad Pitt) and assistant GM Peter Brand (Jonah Hill), faced with the franchise's unfavorable financial situation, take a sophisticated sabermetric approach towards scouting and analyzing players, acquiring "submarine" pitcher Chad Bradford (Casey Bond) and former catcher Scott Hatteberg (Chris Pratt), and winning 20 consecutive games, an American League record.