watch 00:59
The Loop (Movies)
Do you like this video?
Morgan Freeman 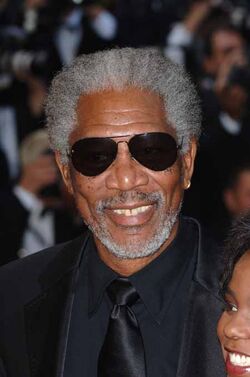 Morgan Freeman (born June 1, 1937) is an actor, film director, and narrator. He is best known for his role in The Shawshank Redemption, Lucius Fox in Christopher Nolan's Batman Begins, The Dark Knight, and The Dark Knight Rises. He also played God in Bruce Almighty and Evan Almighty.

Morgan was born in June 1, 1937 in Memphis, Tennessee, to Mayme Edna (Revere), a teacher, and Morgan Porterfield Freeman, a barber. The young Freeman attended Los Angeles City College before serving several years in the US Air Force as a mechanic between 1955 and 1959. His first dramatic arts exposure was on the stage including appearing in an all-African American production of the exuberant musical Hello, Dolly!.

Retrieved from "https://movies.fandom.com/wiki/Morgan_Freeman?oldid=297084"
Community content is available under CC-BY-SA unless otherwise noted.