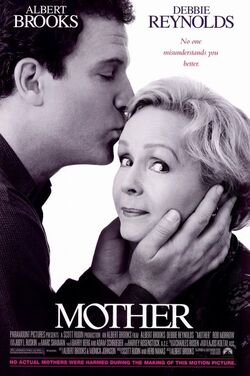 Mother is a 1996 American comedy-drama film directed by Albert Brooks. The cast of the film consists of Brooks, Debbie Reynolds, and Rob Morrow.

John Henderson (Albert Brooks) is a successful science fiction writer who is finalizing his second divorce. He is perplexed by the issues he has with women, realizing that none of them supported or encouraged him. John decides to initiate an experiment that will help him understand what went wrong in his relationships: he moves back in with his widowed mother Beatrice (Debbie Reynolds), occupying the same bedroom he had as a child. His sports agent brother Jeff thinks John is oversensitive to their mother's criticisms, while John believes that their mother favors Jeff.

John's relationship with his mother is characterized by constant bickering and power struggles; both are perfectionists strongly committed to their respective points of view. John believes she's overly critical of him, while Beatrice contends that he unfairly blames her for his personal failings. A rare bright spot in their relationship appears when she takes an interest in John's word processor and impresses him with her fast, flawless typing. Beatrice seems surprised by his interest in her life but is reluctant to discuss it.

When Beatrice cancels her plans to visit Jeff, he has a meltdown and an argument with his wife over his need to keep in constant contact with his mother. Jeff's wife tells him that he may needs to evaluate his relationship with his mother just as much as John. John and Beatrice go to the zoo, where they finally reach some common ground. When they return home, Jeff is waiting; upset by the aborted visit, he came to talk Beatrice into visiting for the weekend. All three argue and Jeff leaves alone, with John satisfied that Jeff's the "sickie" while John is "pretty darn healthy to begin with."

Beatrice tells John that she has a friend, Charles, who comes through San Francisco every few weeks and stays over a few days, but while John is there this visit will be just for one day. John is surprised that she would call someone she is intimate with not important, but she dismisses it, saying they "just have sex occasionally". John meets Charles, who knows a lot about John because, as he tells John, Beatrice brags about him when he's not around. Beatrice and Charles go to dinner; in the car they discuss the evening, with Beatrice refusing to have anything more than dinner because of her son's visit.

While alone at the house, John discovers a box of novel and short story manuscripts that his mother wrote in her youth. He learns she was a skilled writer who went to college on a scholarship, only to have her talent discouraged by her husband and the prevailing social expectation that mothers should not have careers outside the home. John realizes now that his mother's passive aggression toward him stems from the fact that his career is a reminder of her unfulfilled ambitions. Beatrice admits that John's observation is correct, leading to a warm reconciliation.

The film ends with John meeting a single female fan of his novels, and Beatrice beginning to write a story based on John's moving in with her.

Retrieved from "https://movies.fandom.com/wiki/Mother_(1996)?oldid=176892"
Community content is available under CC-BY-SA unless otherwise noted.