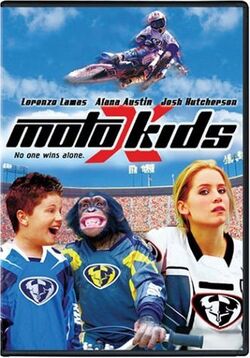 Motocross Kids was a 2004 American movie distributed by Tag Entertainment.

Evan Reed is the best motocross coach in the country. After leading his daughter Callie Reed to the national championships, he decides to set his sites on a more personal challenge - saving a local dirt track from a motorcycle gang members named Viper & Mongo who are trying to take over the land from kids who ride there. But when Evan's best rider named TJ injuries himself before a winner takes all race, a surprising substitute teaches Evan and the kids that anything is possible. Evan finds a replacement rider is Cody the Chimpanzee to ride on motorcycle on motocross by Cody's surprise them that he can ride on it. Cody is the best rider on the motocross.