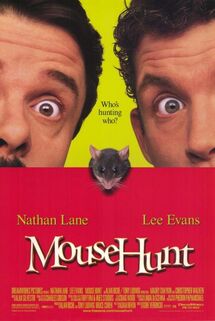 MouseHunt is a 1997 American slapstick comedy film, directed by Gore Verbinski, written by Adam Rifkin and starring Nathan Lane and Lee Evans. It was the first family film to be released by DreamWorks.

When once-wealthy string magnate Rudolf Smuntz (William Hickey) dies, he leaves his outdated string factory and a run-down mansion to his two sons, Lars (Lee Evans) and Ernie (Nathan Lane). When Lars refuses a proposal by representatives from the large Zeppco conglomerate to purchase their string factory, his wife April (Vicki Lewis) throws him out. Meanwhile, Ernie serves Mayor McKrinkle (Cliff Emmich) at his restaurant in anticipation of becoming a famous chef for serving such a high-profile guest. However, the mayor is poisoned by a cockroach (which came from Rudolf's old box of Cuban cigars that Ernie took for himself) and suffers two heart attacks, with the latter fatal. As a result, Ernie's restaurant is closed down by the Board of Health.

Finding blueprints of the mansion that they decide to live in, Ernie and Lars discover that it is a lost masterpiece designed by famous architect Charles Lyle LaRue. LaRue collector Alexander Falko (Maury Chaykin) makes a proposal, but Ernie refuses under the belief they can make a larger profit by restoration and auction. However, the brothers have already realized that the house has one stubborn occupant: a tiny and treacherous mouse. When a single mousetrap proves to be useless against the mouse, Ernie and Lars cover the entire kitchen floor with a number of mousetraps, but end up trapped in the kitchen when the door is locked. The mouse slips through the maze of traps with ease and drops a cherry, setting off the mousetraps in a dominoes effect. The brothers attempt to kill the mouse with a vacuum cleaner, but are covered with sewage.

The brothers purchase a monstrous cat named "Catzilla" to deal with the mouse. Catzilla chases the mouse throughout the house while destroying everything, but gets tricked onto the house's dumbwaiter as the mouse sends him on a one-way trip down to his demise. They then hire an eccentric exterminator named Caesar (Christopher Walken) to handle the mouse, though he is severely injured and hospitalized. Later, Ernie chases the mouse up a chimney and gets stuck, and Lars attempts to light a match while the mouse starts a gas leak, creating an explosion that blasts Ernie out of the chimney and into the lake. Ernie takes a shotgun to fire at the mouse, accidentally shooting a compressed can of pesticide that Caesar left behind, making a large hole. After recovering, the two get into an argument which culminates with Lars throwing an orange at Ernie, but accidentally knocks the mouse unconscious. Unable to finish him off, they instead seal the mouse in a box and mail him to Fidel Castro in Cuba. The brothers reconcile again and finish renovating the house.

When the night of the auction arrives, Lars discovers the mouse's box in the snow returned due to insufficient postage and with a big hole gnawed through it. Lars and Ernie panic upon seeing the mouse return, but attempt to maintain their composure as the auction continues. The mouse also devours Rudolf's "lucky string," which he gave to the brothers before his death, making their vendetta even more personal. The brothers desperately attempt to flush out the mouse by feeding a hose into the wall. As the auction reaches a record $25 million bid, the house rapidly floods through the walls and the floors, causing everyone to be washed out of the house as it promptly collapses. The brothers' only consolation is the fact that the mouse must finally be dead as their father's "lucky string" is found in the wreckage.

With nowhere else to go, the brothers return to the factory and fall asleep, with only a single chunk of cheese for food. Having followed them, the mouse restarts and feeds the cheese into the machinery inventing the world's first string cheese, which inspires Ernie and Lars. Ernie and Lars end their war with the mouse and have successfully rebuilt the factory as a novelty string cheese company. Lars has begun a relationship with one of the two sisters Hilde, and Ernie puts his culinary skill to work in developing new cheese flavors with the mouse as his personal taste-tester.

Retrieved from "https://movies.fandom.com/wiki/MouseHunt?oldid=171492"
Community content is available under CC-BY-SA unless otherwise noted.