Start a Wiki
watch 01:16
The Loop (Movies)
Do you like this video?
Moving 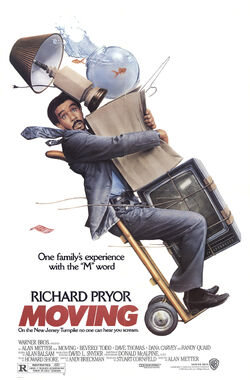 Other notable appearances in the film include Randy Quaid as an annoying neighbor, Dana Carvey as a man with multiple personalities hired to drive Pryor's car, musician Morris Day and WWF wrestler King Kong Bundy as a monstrous mover. The movie is also the film debut of Stacey Dash, as Arlo's daughter Casey.

Arlo Pear (Pryor) is a transportation engineer living in the New Jersey suburbs. One day he goes to work and meets a new female co-worker, and when both of them attempt to enter their keys in the same office doorknob, Arlo guesses what has happened and confronts his boss, Roy Hendersen. He learns that his company has merged with another, and now Arlo is out of a job. He ends the meeting by telling off his boss and in his state of anger, he flips Roy off using his index, rather than his middle finger.

Arlo's wife Monica tries to defuse the situation by telling her husband that she can get him a job at her father's mustard plant, at least until something better comes along. Knowing a job in his own field would better suit him, Arlo refuses. His attempts to find work are futile until he receives a phone call from another engineering firm, due to Roy's influence. The firm all but hires him over the phone, and Arlo is excited – until he finds out that his new job will be in Boise, Idaho. With some hesitation, Arlo takes the job.

Arlo breaks the news to his family first over dinner by telling them he has a new job, but holds off until telling them of the move until towards the end of the conversation, prompting angry responses from both his wife and his daughter Casey. The family uses a "swear jar" to collect cash penalties for the use of obscenities in the house, and Casey puts cash in the jar as she makes her feelings known. Shortly afterwards, Monica retrieves her purse and withdraws a large sum of cash, ordering their twin sons Randy and Marshall to leave the room, implying that her own use of profanity will cost her dearly.

However, Monica calms down later that evening and agrees to the move, but Casey is much less willing to concede, even going so far as to sabotage their attempts to sell their home. They finally tie Casey up in the basement as an attempt to control her, which finally makes Casey listen to reason. They agree to let her stay with family friends in New Jersey until she graduates high school later that year. They sell the New Jersey home and buy one in Idaho from an eccentric older couple, with the husband saying "we're taking it with us" any arbitrary fixture (like the windows and doors), following some of the remarks with "just kidding", until it becomes a running joke.

Arlo and Monica then hire a moving company, whose workers, Perry and Edwards, they find shady and decide to sign with another moving company, whom they perceive as much more professional. Much to their dismay, Perry and Edwards show up and inform them that they now work for the new movers. When Arlo protests, he is intimidated into submission by their massive assistant, Gorgo, (who communicates only with growls and grunts). Having no options left on their moving day, they reluctantly comply.

Throughout all of this is the Pears' relationship with Frank Crawford (Quaid), the obnoxious next-door neighbor in New Jersey who is a shell-shocked Vietnam veteran with antisocial tendencies, including using a noisy V8-powered contraption that he uses to mow his grass every Saturday. However, the passive Arlo is afraid of Frank (though he has fantastic dreams of conquering Frank through martial arts) and fails to reason with him to reduce his noisemaking on the weekends. Despite this, Frank introduces himself to Arlo's new homebuyers under the guise of the model neighbor, telling Arlo he does so "because you people bore me".

Next is finding someone to drive Arlo's Saab to Idaho. They find the ideal driver in Brad Williams (Carvey), a presumed squeaky-clean milquetoast to do the job. However, as they're on the road, they pass Brad at one point, but find him dressed in women's clothes. It's then revealed that Brad is a sociopath with multiple personality disorder.

The Pears arrive at their new home, only to find the pool, windows and doors removed, along with various other fixtures that the seller told the Pears they would be taking with them, without mentioning "just kidding" afterwards (it's discovered that the sellers recorded the original conversation to be legally protected). Then they meet their next-door neighbor, mowing his grass with a large V8-powered contraption and who bears a strong resemblance to Frank Crawford. They learn that he is Cornell Crawford, Frank's twin brother, and with the same confrontational attitude. The events of the day fill up the "Swear Jar" and begin another, almost full "Swear Jar II".

They find that none of their belongings have been delivered. They find that Perry, Edwards and Gorgo have made a stop in New Orleans, way out of their way towards the intended destination. Brad shows up in the Saab, which has been all but totally destroyed. Then, when it seems things can't go any more wrong, Arlo finds that his new job has been eliminated in a very public manner during a press conference. Arlo heads to an area tavern to drown his sorrows and is knocked to the floor during a drunken rant about his plight by a patron who mistakes his rant for a holdup.

Unable to take any more, Arlo first gets on the phone with the former owner of his new home, threatening him physically if he doesn't immediately replace the fixtures he took. Then finds the movers on the road and convinces them to pull the truck over. He knocks out all three, including the massive Gorgo and manages to save his new job. Finally, returns home, with a new attitude and finds Casey who has decided to join them out west after all. The house is begun to be restored to its pre-sale condition. The movers, including a polite and well-spoken Gorgo, handle their belongings with extreme professionalism.

And when Cornell Crawford gets ready to mow his grass, he is interrupted by Pear, who tells him to put his contraption back in the garage and invest in a "human-sized mower". As Cornell says "who's going to make me", he's answered with ferocious barking from Flipper, the Pears' normally hopelessly lazy dog, apparently at the end of his own rope from all the moving mess. Cornell immediately backs off, obviously alarmed, and expresses his admiration for his new neighbors. The film ends with Arlo replying to his new neighbor by flipping him his index finger.

The film was released on DVD as of August 22, 2006, as part of a double feature, packaged with Greased Lightning. Both movies are on the same side of a single disc.

Retrieved from "https://movies.fandom.com/wiki/Moving?oldid=183130"
Community content is available under CC-BY-SA unless otherwise noted.