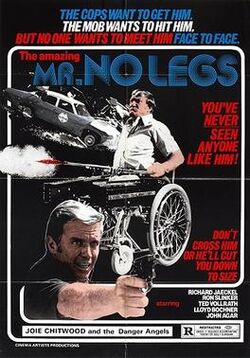 Mr. No Legs is a 1978 American action drama exploitation film directed by Ricou Browning. The cast of the film consists of Richard Jaeckel, Ron Slinker, Lloyd Bochner, and Ted Vollrath.

When Andy's sister's death is staged to look like an overdose, Andy and fellow policeman Chuck investigate the situation and link it to a drug importing ring involving Florida drug kingpin D'Angelo and his enforcer Mr. No Legs, who uses a wheelchair and is armed with two shotguns built into his chair armrests.

Retrieved from "https://movies.fandom.com/wiki/Mr._No_Legs?oldid=183730"
Community content is available under CC-BY-SA unless otherwise noted.