Start a Wiki
watch 01:48
The Loop (Movies)
Do you like this video?
Mulan 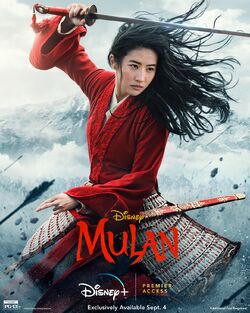 Mulan is an American war drama adventure film directed by Niki Caro with a screenplay by Elizabeth Martin, Lauren Hynek, Rick Jaffa and Amanda Silver, and produced by Walt Disney Pictures. It is a live-action reimagining of Disney's 1998 animated film of the same name, itself an adaptation of the Chinese legend of Hua Mulan. The film stars Liu Yifei as the eponymous character. It was set to be released on March 27, 2020 until it was pushed back to August 21, 2020 due to the COVID-19 pandemic.

Walt Disney Pictures expressed interest in a live-action and 3D adaptation of Mulan starring international star Zhang Ziyi, with Chuck Russell chosen as the director. The film was originally planned to start filming on October 2010, but was canceled. On March 30, 2015, The Hollywood Reporter reported that Disney was developing a live-action adaptation of 1998 animated film Mulan with Chris Bender and J.C. Spink producing while Elizabeth Martin and Lauren Hynek would be writing the screenplay. On October 4, 2016, it was announced that Rick Jaffa and Amanda Silver would rewrite the script, combining the Chinese ballad and the 1998 animated film, while Jason Reed would be producing the film along with Chris Bender and Jake Weiner. Since the original script featured non-Chinese characters, including a white male lead, which got some disagreements from the people, Disney promised that Mulan and all primary characters will remain Chinese in the new script which Rick Jaffa and Amanda Silver rewrote. In February 2017, Bill Kong was reported joining as an executive producer.

Since several recent Hollywood films were accused of whitewashing, Mulan has been under intense scrutiny since The Hollywood Reporter reported that Disney is making a live-action retelling of Mulan. An online petition titled "Tell Disney You Don't Want A Whitewashed Mulan!" rereceived more than 100,000 signatures. On October 4, 2016, Disney announced that a global search for a Chinese actress to portray the title role was underway. On November 29, 2017, Chinese American actress Liu Yifei was cast in the film to portray the titular role of Mulan. A team of casting directors visited five continents and saw nearly 1,000 candidates for the role with criteria that required credible martial arts skills, the ability to speak clear English and, lastly, star quality. Many celebrated this as a win for diversity in Disney films. In April 2018, Donnie Yen, Gong Li, Jet Li, and Xana Tang joined the cast.[11][12] In May 2018, Utkarsh Ambudkar and Ron Yuan joined the cast. In June 2018, Yoson An and Chum Ehelepola joined the cast. In July 2018, Jason Scott Lee joined the cast. In August 2018, Tzi Ma, Rosalind Chao, Cheng Pei-Pei, Nelson Lee, Jimmy Wong and Doua Moua joined the cast.

Disney was trying to find an Asian director in the beginning. Disney first considered Ang Lee, Taiwanese film director, two times Academy Award winner for Best Director. The Hollywood Reporter mentioned that Lee was approached but passed on October 12, 2016. According to the report by The Hollywood Reporter, published on November 22, 2016, he said that seeing an Asian director helming the film would be great. But he had to pass because he was still obliged to promote Billy Lynn's Long Halftime Walk, a film which Lee helmed. After Lee passed, Disney met with Jiang Wen before, on February 14, 2017, Niki Caro was hired as the director of the film, which made Mulan the second Disney movie helmed by a female director with budget over $100 million.

Principal production commenced on August 13, 2018 at different locations in New Zealand and China.

Retrieved from "https://movies.fandom.com/wiki/Mulan_(2020)?oldid=245326"
Community content is available under CC-BY-SA unless otherwise noted.