Moviepedia
Register
Don't have an account?
Sign In
Advertisement
in: Film articles without a specified rating, Muppet films, 1996 films,
and 28 more

As in the earlier The Muppet Christmas Carol, the key roles were played by human guest stars - in this case, Tim Curry as Long John Silver and Kevin Bishop as the putative protagonist Jim Hawkins - while the Muppets filled in supporting roles, including Kermit the Frog as Captain Smollett Trelwaney, Fozzie Bear as Squire Trelwaney, and Miss Piggy as Benjamina Trelwaney. Following their success as the narrators of The Muppet Christmas Carol, The Great Gonzo and Rizzo appear in specially-created roles as Jim Hawkins, and steal the show.

The film featured a non-specific reference to the "Big Blue Wet Thing," though Silver (using the stars) determines they are heading southwest. The only ocean they could be in is the Pacific Ocean if they set off from England. While featuring the Muppets' usual good-natured slapstick humor, several musical numbers, and the occasional twist, the film stays fairly true to the familiar Stevenson storyline.

Jim Hawkins, (Kevin Bishop), the son of a first mate works with his friends Gonzo and Rizzo at an inn which caters to sailors, including Billy Bones (Billy Cannolly), who frequently tells a tall tale of pirate Captain Bernie Flint and how he buried his treasure on an island ("Shiver My Timbers"). Jim finds his life boring and dreams of adventure on the high seas ("Something Better"). One night, 'visually challenged' pirate Blind Pew arrives at the inn and confronts Bones (who actually sailed with Captain Flint and is a former shipmate of Blind Pew), leaving him with a piece of paper bearing the dreaded 'Black Spot'—a traditional pirate death sentence. Bones prepares to leave, realizing that Blind Pew and his other former crew mates will come to kill him, but suddenly dies of a heart attack, leaving a treasure map from his sea chest to Jim. The map is the same one that leads to Captain Flint's treasure. Blind Pew and the pirates suddenly raid the inn, leading to much confusion that ultimately results in the inn being burned down when Gonzo and Rizzo have an accident with a lit candle and some gunpowder.

Jim and his friends travel to Bristol to obtain a ship to find the treasure and meet with Squire Trelawney (Fozzie Bear), who agrees to finance the voyage (he is clearly eccentric and believes a character called 'Mr. Bimbo' lives in his finger). On the ship Hispaniola, Jim and the others meet the crew for the voyage, including uptight First Mate Samuel Arrow (Sam the Eagle) and ship's cook Long John Silver (Tim Curry). Gonzo is suspicious of one-legged Silver, as Billy Bones frequently warned of a 'one-legged man', but Jim doesn't agree. The voyage begins after no-nonsense Captain Abraham Smollett (Kermit the Frog) arrives and they set sail in high spirit ("Sailing for Adventure").

It becomes evident though during the roll call, that the crew all seem to be scoundrels. Trelawney admits that 'Mr. Bimbo' has recruited them, as it was on the advice from Silver. Captain Smollett's doubts about them are given credence when Polly (Silver's pet lobster), Clueless Morgan and Mad Monty kidnap and torture Gonzo and Rizzo to learn about the location of the rumored treasure map. They are caught in the act by Mr. Arrow who then locks them up in the brig on Smollett's orders. Following this incident, Smollett has Mr. Arrow lock the map in his cabin. While discussing this with his new friend Silver, Jim accidentally mentions that there is a map and its location. Playing on Mr. Arrow's doubts about the safety of the ship, Silver tricks him into rowing away from the Hispaniola to test a lifeboat. Mr. Arrow falls for it and leaves Silver with his keys, having reasoned that it would be disastrous if the keys were to fall overboard. Silver and the crew convince everyone else that Mr. Arrow drowned. During their voyage, the wind dies and they are left at a standstill in the ocean, causing them to temporarily become insane with cabin fever ("Cabin Fever").

While snacking on some apples in a barrel, Jim, Gonzo and Rizzo overhear Silver warning the escaped Polly, Clueless Morgan, and Monty to not mutiny until he says so and reveals his involvement in Mr. Arrow's disappearance. Jim finally realizes that Silver is a villain. Captain Smollett, alerted to Silver's treachery by Jim, convinces Silver to take the crew ashore as they approach Treasure Island planning to abandon them there. However, Silver is wise to the captain's plan and kidnaps Jim. Silver tries to convince Jim that he should join the pirates ("A Professional Pirate") as Captain Smollett, Gonzo and Rizzo row ashore to attempt a rescue. Unfortunately, this leaves the ship open to take over by a few pirates who stayed behind and easily overpower the Squire, Dr Livesey (Bunsen Honeydew) and Beaker. Jim is forced to help the pirates find the treasure using his father's compass, but there is no treasure and the pirates turn against Silver for having them turn to mutiny against the captain for nothing. Silver holds the pirates off after forcing Jim to escape, stating that liking Jim as a friend is the one thing Silver didn't lie about.

Meanwhile, Captain Smollett, Gonzo and Rizzo are captured by the wild boar tribe native to the island and brought before their queen ("Boom Shakalaka"), who turns out to be Benjamina Gunn (Miss Piggy), a former fiancée of the captain. While she berates Smollett for having jilted her years ago, Jim rescues Gonzo and Rizzo. They return to the ship with the aid of Mr. Arrow, who suddenly turns up in his lifeboat alive, and scare the pirates away by having Mr. Arrow pose as his own ghost. The other pirates decide to kill Silver and give him the Black Spot (that Monty drew on a page torn from a Bible), but Silver plays on their fears and superstitions and tricks them into reinstating him as their leader. Meeting up with the captain and Benjamina (who, it turns out, also had a fling with Silver and also Captain Flint who marooned her), Silver threatens to drop Smollett off a cliff unless Benjamina tells him where she hid the treasure (which she took for herself). Once she tells him though, the pirates leave them both facing a plunging doom. Smollett assures Mina that at least they are together again ("Love Led Us Here").

Captain Smollett and Mina are rescued by Jim and the others aboard the Hispaniola and they battle the pirates, ultimately winning the help of the local tribes and Sweetums (who was actually on Smollett's side). They load up the treasure and prepare to return to England with the pirates in the brig, but Silver escapes (since he still had Mr. Arrow's keys with him) and flees in a lifeboat with some of the treasure. Jim catches him escaping and Silver attempts to shoot Jim, but ultimately decides he can't kill the boy. Touched by this, Jim advises Silver to just leave and he does. Smollett, having witnessed this, assures Jim that he did the right thing, and that his father would be proud. However, Mr. Arrow reveals to Jim and the captain that the lifeboat Silver took has a leak. The boat sinks and Silver is left marooned on the treasure island as Jim and the others—joined by Mina's tribe—set sail again, this time to "wherever the wind may take us". The crew of the Hispaniola sail off into the sunset while some scuba-diving rats recovers the treasure, ending the film.

During the credits, an Island Head tells a marooned Long John Silver a joke that goes "Why does the ocean roar? Give up? You would too if you﻿ had crabs on your﻿ bottom and oysters in your bed." 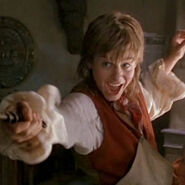 Jim, behind the scenes 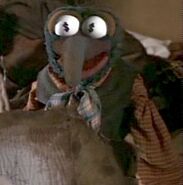 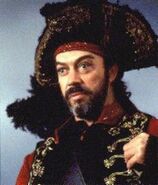 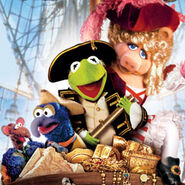 A poster of Muppet Treasure Island

Statler and Waldorf as the figurehead

Captain Smollett hanging over a cliff. Mina and Long John are in the back 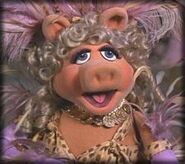 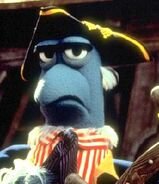