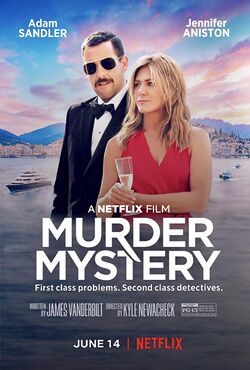 Murder Mystery is a 2019 American mystery-comedy film directed by Kyle Newacheck. The cast of the film consists of Adam Sandler, Jennifer Aniston, Luke Evans, and follows a married couple who are caught up in a murder investigation on a billionaire's yacht..

The film was released in the United States on June 14, 2019 by Netflix.

Nick Spitz is a New York police officer, and his wife Audrey is a hairdresser. Audrey wants to go to Europe as Nick promised her they would at their wedding, but with their 15th wedding anniversary coming up, she thinks they will never go. After an anniversary dinner, Audrey confronts him. Nick lies and says he has in fact booked the trip for their anniversary and they set off to Europe. On the plane, Audrey meets billionaire Charles, Viscount Cavendish, who invites the couple to join him on his family’s yacht for a party celebrating his elderly uncle's upcoming wedding to Charles's former fianceé. Nick reluctantly agrees to it after seeing how crowded their previously planned euro bus tour would be.

On the yacht, Nick and Audrey meet Lord Cavendish’s ex-fiancée Suzi, his cousin Tobey (Malcom's only son) actress Grace Ballard, Colonel Ulenga, his bodyguard Sergei, the Maharaja Vikram of Mumbai, race car driver Juan Carlos, and finally Malcolm Quince, Lord Cavendish’s uncle, the owner of the boat and host of the party. Quince announces that his new wife Suzy will be the only one to receive his inheritance believing the others only feign interest in him because of his money. Before he can sign the new will, the lights go out and when they come back on, Quince is found dead stabbed by his own dagger.

Nick (who has faked being a detective for Audrey’s sake) orders the room be locked; the guests return to their rooms. Later that night, the guests find Tobey dead from an apparent suicide. Upon arriving in Monte Carlo, the guests are questioned by Inspector Laurent Delacroix, who believes Nick and Audrey are guilty of the murders and later orders a manhunt for them.

At the Monaco Grand Prix, Nick and Audrey question the guests. That night, Sergei summons them to his room, where he reveals Quince had an affair with the colonels lover while the colonel was in a coma. This resulted in a child who was allegedly stillborn. When someone knocks on the door, the couple hide; when they come out, they find Sergei has been murdered. While fleeing, Audrey finds out Nick is not a detective and also lied about booking the trip in advance. She is furious and leaves with Lord Cavendish.

Nick follows Suzi to a library where he finds Audrey, who reveals Cavendish is in the building as well. While talking, they realize that Cavendish and Suzi are secretly in love and assume that they are the culprits. A hidden gunman begins shooting at them. The couple flee again, until they meet Juan Carlos and are confronted by Suzi, who is then killed by a dart. She tried to motion to them who the killer is, but only motion being spoon fed and a claw. Neither understand what that means. Nick injures the killer, who gets away. Nick and Audrey then go to Quince’s mansion to confront Viscount Cavendish about the murders, but find him dead by poisoning.

The couple summon Delacroix and the remaining guests (Ulenga, Grace, Vikram, and Juan Carlos). They all have alibis, despite there being two murderers. The couple deduce that Grace is the murderer; she was helped by Tobey, then killed him. Grace reveals that she is the child that “died” and that Quince’s money truly belongs to her. She denies being the killer, but Audrey proves it, and she is arrested.

While celebrating, Nick and Audrey learn that she had another alibi, meaning that there is another killer. They realize that Juan Carlos is the second murderer and that he wanted revenge against Quince, blaming him for his father’s death. Juan Carlos kidnaps Delacroix, causing Nick and Audrey to engage him in a car chase. They are able to get the car to crash, rescuing Delacroix. Juan Carlos then holds them all at gunpoint, but he is then killed by a speeding bus.

Delacroix thanks the couple and offers to help get Nick selected as detective. As a thanks, Delacroix treats the couple to a train ride on the Orient Express.

Retrieved from "https://movies.fandom.com/wiki/Murder_Mystery?oldid=215716"
Community content is available under CC-BY-SA unless otherwise noted.