Start a Wiki
Murder on the Orient Express 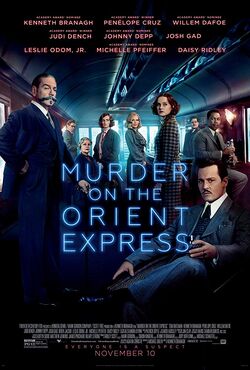 The Belgian detective Hercule Poirot boards the Orient Express. One of the passengers requests his protection, but Poirot declines. The next day the passenger is found dead in his compartment and Poirot is asked to solve the case. The train is forced to stop due to a snow drift blocking the tracks. This gives him a few hours to figure out the murderer's identity before the local police take over the investigation. During his investigation, Poirot discovers that many of the passengers have some connection. This could be the vital clue to crack the case, but can he do it in time?

Retrieved from "https://movies.fandom.com/wiki/Murder_on_the_Orient_Express_(2017)?oldid=169110"
Community content is available under CC-BY-SA unless otherwise noted.