Start a Wiki
watch 01:16
The Loop (Movies)
Do you like this video?
Naomi Watts 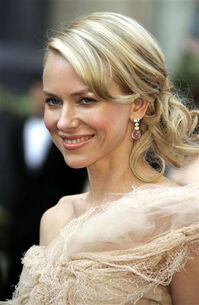 Naomi Watts was born on September 28, 1968 in Shoreham, Kent, England. Her father died in 1976 from a presumed heroin overdose.

Watts started by working for the soap opera Return to Eden. She is best known for her roles in The Ring, Mulholland Drive, 21 Grams, King Kong, and Eastern Promises. She recently starred in the films Fair Game and J. Edgar.

Retrieved from "https://movies.fandom.com/wiki/Naomi_Watts?oldid=110352"
Community content is available under CC-BY-SA unless otherwise noted.