View src
watch 02:07
Spider-Man: No Way Home Trailer Dropped - The Loop
Do you like this video?
Play Sound
Nathan Lane 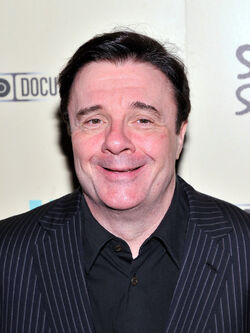 Nathan Lane (born Joseph Lane; February 3, 1956) is an American stage, film and television actor and writer. He is known for his roles as Albert in The Birdcage, Max Bialystock in the musical The Producers, Ernie Smuntz in MouseHunt, Nathan Detroit in Guys and Dolls, Pseudolus in A Funny Thing Happened on the Way to the Forum, his voice work in Stuart Little as Snowbell and The Lion King as Timon, and his recurring roles on Modern Family, The Good Wife, and American Crime Story: The People v. O. J. Simpson as F. Lee Bailey. In 2006, Lane received a star on the Hollywood Walk of Fame, and in 2008, he was inducted into the American Theatre Hall of Fame.

Lane was born Joseph Lane in Jersey City, New Jersey on February 3, 1956. His father, Daniel, was a truck driver and an aspiring tenor who died in 1967 from alcoholism when Lane was eleven. His mother, Nora, was a housewife and secretary who suffered from manic depression and died in 2000. He has two older brothers, Daniel Jr. and Robert. Lane's parents were Catholics of Irish descent. He was named after his uncle, a Jesuit priest. Lane attended Catholic schools in Jersey City, including Jesuit-run St. Peter's Preparatory High School, where he was voted Best Actor in 1974, and years later received the 2011 Prep Hall of Fame Professional Achievement Award.

Accepted to Saint Joseph's University in Philadelphia on a drama scholarship, he was accompanied on what was supposed to be his first day there by his older brother Dan. Discovering that the scholarship would not cover enough of his expenses, he decided to leave, and work for a year to earn some money. "I remember him saying to me, 'College is for people who don't know what they want to do,'" his brother said. Because there already was a Joseph Lane registered with Actors Equity, he changed his name to Nathan after the character Nathan Detroit from the musical Guys and Dolls. He moved to New York City where, after a long struggle, his career began to take off, first with some brief success in the world of stand-up comedy with partner, Patrick Stack, and later with Off-Broadway productions at Second Stage Theatre, the Roundabout Theatre, and the Manhattan Theatre Club. He made his Broadway debut in a 1982 revival of Noël Coward's Present Laughter as Roland Maule (Drama Desk nomination) with George C. Scott, Kate Burton, Dana Ivey, and Christine Lahti.

His second Broadway appearance was in the 1983 musical Merlin, starring Chita Rivera and magician Doug Henning. This was followed by Wind in the Willows as Mr. Toad, Some Americans Abroad at Lincoln Center, and the national tour of Neil Simon's Broadway Bound.

Off-Broadway productions included Love (the musical version of Murray Schisgal's Luv), Measure for Measure directed by Joseph Papp in Central Park, for which he received the St. Clair Bayfield Award, The Common Pursuit, The Film Society, In a Pig's Valise, She Stoops to Conquer, The Merry Wives of Windsor and A Midsummer Night's Dream. He also appeared at the Williamstown Theatre Festival in The School for Scandal and John Guare's Moon Over Miami.

In 1991, Lane appeared with George C. Scott again in a revival of Paul Osborne's On Borrowed Time at the Circle in the Square Theatre on Broadway. In 1992, he starred in the hit revival of Guys and Dolls, playing the character who lent him his name, opposite Peter Gallagher and Faith Prince. For this performance, he received his first Tony nomination, as well as Drama Desk and Outer Critics Circle Awards. In 1992, he won an Obie Award for Sustained Excellence of Performance.

His professional association with his close friend the playwright Terrence McNally, whom he met in 1987, includes roles in The Lisbon Traviata (Drama Desk and Lucille Lortel Awards), Bad Habits, Lips Together, Teeth Apart, Love! Valour! Compassion! (Obie, Drama Desk, and Outer Critics Circle Awards), Dedication or the Stuff of Dreams, which opened in 2005 (Drama Desk nomination), The Last Mile on PBS Great Performances, and the film version of Frankie and Johnny.

The early 1990s began a stretch of successful Broadway shows for Lane. In 1993, he portrayed Sid Caesar-like Max Prince in Neil Simon's Laughter on the 23rd Floor, inspired by Simon's early career writing sketches for Your Show of Shows In 1996, he starred in the hit revival of A Funny Thing Happened on the Way to the Forum, for which he won the Tony, Drama Desk and Outer Critics Circle Awards. In 1998, he appeared Off-Broadway in Jon Robin Baitz's revised 1984 comedy, Mizlansky/Zilinsky or 'Schmucks'.

His association with Sondheim began with the workshop of Assassins. In 1999, he appeared with Victor Garber in the workshop of Wise Guys (later retitled Road Show). His collaboration with Sondheim continued when Lane revised the original book for and starred in the Broadway debut of the composer's The Frogs at Lincoln Center in 2004. The Sondheim song, "Little Dream," in the film The Birdcage, a role for which Lane received his first Golden Globe nomination, was supposedly written especially for him.

In 1994, Lane voiced Timon, the meerkat, in Disney's blockbuster animated film The Lion King and reprised the role in its sequels. In 1995, he played the Cowardly Lion in The Wizard of Oz in Concert at Lincoln Center to benefit the Children's Defense Fund. The performance was originally broadcast on Turner Network Television (TNT). In 1999, he appeared in the Encores! concert revival of Do Re Mi at City Center.

Lane starred in the Roundabout revival of The Man Who Came to Dinner as Sheridan Whiteside, with Jean Smart and Harriet Harris in 2000.

In 2001, he starred as Max Bialystock in the blockbuster musical version of Mel Brooks's The Producers, a role that earned him his second Tony as well as Drama Desk and Outer Critics Circle Awards. In 2004, he replaced Richard Dreyfuss, who was let go just a week before the show's first preview at London's Theatre Royal Drury Lane, and went on to win the Olivier Award as Best Actor in a Musical. His performance in the film version, opposite Broadway co-star, Matthew Broderick as Leo Bloom, earned him his second Golden Globe nomination for Best Performance by an Actor in a Motion Picture, Musical or Comedy. In 2003 he starred Off-Broadway in Trumbo: Red, White, and Blacklisted

In 2005, Lane rejoined Broderick for a successful limited run of The Odd Couple. In 2006, he took on a primarily dramatic role in a revival of Simon Gray's Butley, having played the role to great success at The Huntington Theater in Boston in 2003. He and Broderick received adjacent stars on the Hollywood Walk of Fame in a joint ceremony on January 9, 2006 and were immortalized in wax as Max and Leo at Madame Tussauds Museum in New York City on January 16, 2009. In 2008, he played the President of the United States in the David Mamet political satire, November, directed by Joe Mantello. This was followed by the critically acclaimed 2009 revival of Waiting for Godot (Outer Critics Circle nomination) in which he played Estragon opposite Bill Irwin's Vladimir. He was a 2008 American Theatre Hall of Fame inductee.

In 2010, Lane starred in the musical version of The Addams Family as Gomez (Drama Desk and Outer Critics Circle nominations). Committed to starring in a revival of the Eugene O'Neill play The Iceman Cometh at Chicago's Goodman Theatre in 2012, Lane assumed the role of Hickey, with Brian Dennehy playing the role of Larry Slade in a production directed by the Goodman's Artistic Director, Robert Falls. Receiving rave reviews, it won six Jeff Awards, including Best Ensemble, Director, and Production, and is the most successful show to date in the theater's history. In the spring of 2013, Lane returned to Broadway in The Nance, a Lincoln Center production of new play by Douglas Carter Beane that was directed by Jack O'Brien. For this performance, he received Tony and Drama Desk Award nominations and won the Outer Critics Circle Award and the 2013 Drama League Award for Distinguished Performance. The play aired on PBS Live from Lincoln Center in 2014.

In autumn 2014, he appeared in an all-star ensemble of Terrence McNally's revised and updated It's Only a Play, with F. Murray Abraham, Matthew Broderick, Stockard Channing, Rupert Grint, Megan Mullally, and Micah Stock. The show became one of the biggest hits of the season. In February 2015 he reprised the role of Hickey in the Robert Falls production of The Iceman Cometh to great acclaim at the Brooklyn Academy of Music. He later returned to the Broadway run of It's Only a Play. In March 2016 he opened the play White Rabbit, Red Rabbit Off-Broadway. In fall of 2016 he returned to Broadway to rave reviews in an all-star revival of Hecht and MacArthur's The Front Page, directed by Jack O'Brien and produced by Scott Rudin. He played the ruthless editor Walter Burns opposite John Slattery as Hildy Johnson and John Goodman as Sheriff Hartman.