watch 01:56
The Loop (Movies)
Do you like this video?
Play Sound
National Lampoon's Christmas Vacation 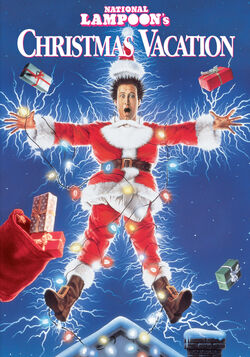 Since its release in 1989, Christmas Vacation has often been labeled as a modern Christmas classic. It is also the only sequel in the Vacation series to have spawned its own direct sequel: a 2003 made-for-TV release entitled National Lampoon's Christmas Vacation 2: Cousin Eddie's Island Adventure.

The film has achieved six home video releases: VHS and Laserdisc in early 1990, a bare bones DVD in 1997, and a "Special Edition" DVD in 2003. A Blu-ray edition was first released in 2006. In 2009, the film was released as an "Ultimate Collector's Edition." At the same time of this release, it was also released on a simple Blu-ray/DVD combo. A steelbook Blu-ray was released in 2015.

With Christmas only a few weeks away, Chicago resident Clark Griswold decides it is time to get a Christmas tree. He gathers his wife Ellen, daughter Audrey, and son Rusty and drives out to the country where he picks out a huge tree. Realizing too late that they didn't bring any tools to cut the tree down, they are forced to uproot it instead, before driving home with the tree strapped to the roof of their car.

Soon after, both Clark's and Ellen's parents arrive to spend Christmas, but their bickering quickly begins to annoy the family. Clark, however, maintains a positive attitude, determined to have a "fun old-fashioned family Christmas." He covers the house's entire exterior with 25,000 twinkle lights, which fail to work at first, as he has accidentally wired them through his garage's light switch. When they finally come on, they temporarily cause a citywide power shortage and create chaos for Clark's snobby neighbors, Todd and Margo. While standing on the front lawn admiring the lights, Clark is shocked to see Ellen's cousin Catherine and her husband Eddie, as they arrive unannounced with their children, Rocky and Ruby Sue, and their Rottweiler dog, Snot. Eddie later admits that they are living in the RV they drove, as he is broke and has been forced to sell his home. Clark offers to buy gifts for Eddie's kids so they can still enjoy Christmas.

Clark begins to wonder why his boss has not given him his yearly bonus, which he desperately needs to replace an advance payment he has made to install a swimming pool. After a disastrous Christmas Eve dinner, he finally receives an envelope from a company messenger, who had overlooked it the day before. Instead of the presumed bonus, the envelope contains a free year's membership for the Jelly of the Month Club. This prompts Clark to snap and go into a tirade about Frank, and out of anger, requests that he be delivered to the house so Clark can insult him to his face.

Eddie takes the request literally, drives to Frank's mansion, and kidnaps him. Clark confronts him about the cancellation of the employees' Christmas bonuses. Meanwhile, Frank's wife, Helen, calls the police, and a SWAT team storms the Griswold house and holds everyone at gunpoint. Frank decides not to press charges and explains the situation to his wife and the authorities, who scold him for his decision to scrap the bonuses, and decides to reinstate them (with Clark getting an add-on of 20% of his salary).

The family head outside, with Rocky and Ruby Sue believing they see Santa Claus in the distance. Clark tells them it's actually the Christmas Star and that he finally realizes what the holiday means to him. Uncle Lewis says the light is coming from the sewage treatment plant; reminding Clark that Eddie had been dumping his sewage into a storm drain. Before Clark can stop him, Uncle Lewis tosses a lit match, triggering an explosion. Aunt Bethany starts singing "The Star-Spangled Banner" and the whole family and the SWAT team join in, gazing at Clark's Santa Claus and reindeer set burning and flying into the distance. The entire family and the SWAT team members then celebrate inside the house, while Clark and Ellen happily share a Christmas kiss.

Retrieved from "https://movies.fandom.com/wiki/National_Lampoon%27s_Christmas_Vacation?oldid=284328"
Community content is available under CC-BY-SA unless otherwise noted.