Start a Wiki
Nausicaä of the Valley of the Wind
風の谷のナウシカ 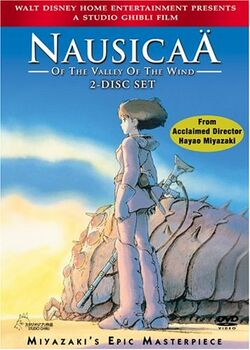 Nausicaä of the Valley of the Wind (風の谷のナウシカ, Kaze no tani no Naushika?) is a 1984 film by Japanese writer, illustrator, and filmmaker Hayao Miyazaki, based on his manga of the same name. The movie has an environmentalist undertone and was presented by the World Wildlife Fund when it was released in 1984.

The story takes place 1,000 years after the "Seven Days of Fire," an event which destroyed human civilization and most of the Earth's original ecosystem. Scattered human settlements survive, isolated from one another by the "Sea of Corruption" (fukai, sea of rot/fungus in Japanese), a lethally toxic jungle of fungus swarming with giant insects which seem to come together only to wage war.

The title character, Nausicaä (Naushika transcribed into Japanese), is a charismatic young princess of the peaceful Valley of the Wind. Her name comes from the princess in the Odyssey who assisted Odysseus; part of her character comes from a Japanese folk hero known as "the princess who loved insects", while another part was inspired by the writings of Bernard Evslin, as he had written a more indepth extrapolation of character of Odyssey 's Nausicaa. [1] Although a skillful fighter, she is normally humane and peace-loving. She has an unusual gift for communicating with the giant insects (particularly with the Ohmu, the gigantic armored caterpillar-like insects who are the most intelligent creatures in the Sea of Corruption). She is also noted for her empathy toward animals, humans, and other beings, and for her skill at "windriding", flying with an advanced glider-like craft with a jet assist called a mehve.

The Valley of the Wind becomes threatened when another state, Pejite, unearths a God Warrior (kyoshinhei) which is then stolen by a more powerful state, Tolmekia. The God Warrior is one of the lethal giant bioweapons used in the ancient war. Pejite and Tolmekia hope to use the God Warrior against each other and, ultimately, against the Sea of Corruption. While transporting the Warrior back to their realm, the Tolmekians are attacked by insects and subsequently crash-land in the Valley. The very next day, the Tolmekians invade the Valley to secure and revive the Warrior, eventually forcing the peaceful people of the Valley into armed resistance. The situation deteriorates as the fight to possess the God Warrior escalates out of control and the inimical fukai strikes back against those who attack it.

The story holds deeper meaning beyond war, however. Even the insects seem to be working toward some secret harmony and the lethal fungal forest seems to have a vital role in Earth's new dominant ecosystem.

As she is forced to aid prisoners, villagers, enemies, mutant insects, and artificial bioweapons, Princess Nausicaä increasingly becomes a Joan of Arc figure—a warrior maiden inspired by a supermundane vision to defend all life against destruction.

A heavily edited and English-dubbed version of the film was distributed and shown on HBO and released on video in the 1980s as Warriors of the Wind. According to Nausicaa.net, the voice actors and actresses were not even informed of the film's plotline (leading to a substandard performance from the voice actors) and over 30 minutes of footage were cut from the film. Much of the film's depth was removed as a result, with much of the environmental themes of the film purged and the main subplot about the Ohmu being altered to turn them into aggressive enemies. Most of the characters were renamed (Nausicaä became "Princess Zandra") and for added misdirection, the box art for the VHS release featured a cadre of male characters who are not part of the film riding a sandworm, ala Dune.

Most fans of Nausicaä, along with Miyazaki himself, dislike that version (Miyazaki said people should put the version "out of their minds") [1]. Studio Ghibli has asked fans to forget its existence, and has subsequently adopted a strict "no-edits" clause for future foreign releases of its films. A common rumor tells of Miyazaki sending Harvey Weinstein, the man in charge of handling the Disney/Miramax release, an authentic katana with a simple message: "No cuts"[2] when he heard that Weinstein would try to cut Princess Mononoke to make it 'marketable.' A re-dubbed uncut version from Disney was released on DVD on February 22, 2005 for Region 1. (This DVD also includes the Japanese audio track with subtitles.) Optimum Releasing released the film in Region 2, and Region 4 distribution is handled by Madman Entertainment.

The Nausicaä manga is published in English by VIZ Media. Earlier editions of the English manga and fan translations often used the title Nausicaä of the Valley of Wind, omitting the definite article.

The film stars the following voice actors in the 1984 Japanese and 2005 re-dubbed English versions:

The mehve (Japanese: メーヴェ) is a fictional one-person plane/glider. It is unarmed, though the pilot can deploy non-lethal flash grenades to disorient pursuers. It has an approximate wingspan of 4 meters, and does not provide any protection from the elements for the pilot who is completely exposed to the wind. Although its performance specifications are not clear, it is slow enough to allow the pilot to hold onto and control it with nothing more than his/her arms and body weight. The mehve also possesses V/STOL capabilities. The name 'mehve' is an adaptation of the German word 'Möwe', meaning 'seagull', relating to its form and white color. Also note that the Valley of the Wind is near the sea and it is the constant wind from the sea which protects its inhabitants from the toxic atmosphere of the Sea of Corruption. Recently, the Japanese-led OpenSky Project has attempted to build a real-life, working Mehve.

Wikiquote has a collection of quotations from or about:
Nausicaä of the Valley of the Wind

Retrieved from "https://movies.fandom.com/wiki/Nausica%C3%A4_of_the_Valley_of_the_Wind?oldid=187664"
Community content is available under CC-BY-SA unless otherwise noted.