News of the World

Edit
watch 01:23
Wiki Targeted (Entertainment)
Do you like this video?
Play Sound
News of the World 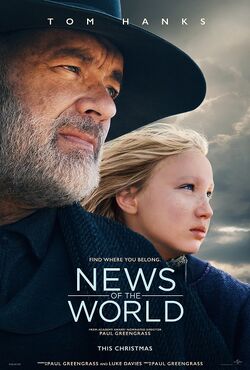 News of the World is a 2020 American coming-to-age western action drama movie directed by Paul Greengrass with the screenplay by Greengrass and Mr Luke Davies. It is based off this 2016 novel has been same name by Paulette Jiles. It stars Tom Hanks and Helena Zengel. The film follows an aging Civil War veteran who must return a young girl who was taken in by the Kiowa and raised as one of them, to her last remaining family. She had lost both her birth and Kiowa families.

In 1870, Captain Jefferson Kyle Kidd, a former Confederate soldier who served in the 3rd Texas Infantry, makes a living traveling town to town reading newspapers to local residents for ten cents per person. Following an evening of news reading, Kidd sets out for his next location and comes across an overturned wagon on the road. Investigating, he finds the body of a lynched black freedman and a live young white girl named Cicada (Johanna, according to her papers), dressed in Native American clothing and speaking Kiowa. After an encounter with a Union Army patrol, Kidd is instructed to take the girl to Union officials at an outpost in a town up the road, where they will sort out her Bureau of Indian Affairs paperwork and return her to her surviving family. Reluctantly, Kidd acquiesces to the request.

At the checkpoint, Kidd is informed that the outpost's Bureau of Indian Affairs representative won't be available for three months. Seeking shelter with an old war comrade of his, Kidd reads the news, and, upon returning, he accepts responsibility for taking Johanna to her surviving family after she tries to run away with a band of traveling Native Americans. As they venture out, they have difficulty communicating due to speaking different languages. Kidd stops at a local inn/diner and greets an old acquintance, who speaks Kiowa and speaks briefly to the child. Kidd spends the night with the woman before resuming his journey. The situation worsens the next night when Kidd is confronted by three ex-Confederate soldiers who try to purchase Johanna from him. He declines, but after being briefly detained by Union soldiers for confronting Kidd, the three men pursue him, leading to a shootout in the wilderness during which Johanna and Kidd are able to outsmart and kill their pursuers.

Entering the next county, they encounter a large group of abusive, racist militiamen led by Farley, essentially the "dictator" of the group, who has taken over the county and demands Kidd perform a reading from a "newspaper" he wrote that glorifies him. Kidd instead reads a story about a disaster in a Pennsylvania coal mine that whips Farley's workers into a rebellious fury; he and Johanna escape in the ensuing melee. Farley stops Kidd before he can escape. Kidd is beaten and when he refuses to read Farley's newspaper, Farley prepares to shoot him. Johanna has sneaked away and shoots Farley with Kidd's shotgun. She aims at Farley's henchman, but is out of bullets. As she is about to get shot, a man named John Calley, inspired by Kidd, shoots the henchman as well as Farley and saves them. In the aftermath, after riding briefly with Kidd and Johanna , Calley joins another party, handing Kidd his gun. Kidd and Johanna continue towards San Antonio to locate Johanna's surviving family.

As they continue their journey, their wagon is soon wrecked when the horse inexplicably bolts and the wagon and horse both crash down a ravine. Kidd shoots the dying horse, leaving Johanna and Kidd no choice but to continue on foot. They nearly die of thirst and heat stroke before, after encountering a brief dust storm, Johanna obtains a horse from Kiowa tribesmen walking nearby.

Kidd and Johanna eventually reach her aunt and uncle's farmstead, the former revealing that Johanna's parents had struck out on their own and moved to the Hill Country, where the land would be cheaper; they were killed in a Kiowa raid. Kidd reluctantly leaves Johanna with them and returns to his hometown of San Antonio. He visits the grave of his wife, Maria Luisa Betancourt Kidd, who died from cholera in 1865 while he was serving in the Army. Now without any kin, he mournfully leaves his wedding ring and a locket on her tombstone.

Kidd then decides to ride back to the village where he left Johanna, where he discovers that her relatives tied her to a pole for trying to run away. Asking for forgiveness, Kidd tells Johanna (in Kiowa) that she belongs with him. Johanna accepts and her aunt and uncle let them go. In an epilogue, Kidd reads the papers in another town assisted by Johanna, his adopted daughter.

In May 2017, Fox 2000 Pictures bought distribution rights to an adaptation of the Paulette Jiles novel with Luke Davies writing the screenplay and Tom Hanks set to star. In February 2019, Paul Greengrass was announced as director. As a result of the Disney/Fox merger, the film was transferred to Universal Pictures. In August, Helena Zengel, Michael Covino, and Fred Hechinger were added to the cast, and Thomas Francis Murphy joined in September. Filming commenced on September 2, 2019, in Santa Fe, New Mexico. Kiowa Tribe member Dorothy WhiteHorse coached Zengel in the Kiowa language and other details of Native American life and behavior, while Tribal Chairman Matthew Komalty praised the film's crew for their attention to accuracy.

In November 2020, Netflix bought the international distribution rights to the film (excluding the United States).

This film has been release in December 25, 2020 on theatrical release, which was followed by a Premium video on demand (PVOD) release in the United States on January 15, 2021. It originally was going to be released by Fox 2000 Pictures. In November 2020, it was announced that Netflix had acquired international distribution rights, except for the United States and China, and released it digitally on its streaming service on February 10, 2021.

On March 2, 2021 Universal Pictures Home Entertainment officially announced the release date of News of the World to physical media, including Blu-ray Disc, 4k Ultra HD Blu-ray Disc, and DVD, would be March 23, 2021.

In the United States, News of the World, released alongside Wonder Woman 1984, Promising Young Woman, and Pinocchio, was projected to gross around $4 million from 1,900 theaters in its opening weekend. The film made $1.05 million on its first day, and went on to debut to $2.3 million, finishing second at the box office behind Wonder Woman 1984; 70% of the audience was over the age of 35.

Review aggregator website, Rotten Tomatoes reports that 88% of 255 reviews of the film were positive, with an average rating of 7.4/10. The website's critics consensus reads: "News of the World takes a slow but absorbing ride down a comfortingly familiar Western trail, guided by Tom Hanks in peak paternal mode." According to Metacritic, which sampled 45 critics and calculated a weighted average score of 73 out of 100, the film received "generally favorable reviews". Audiences polled by CinemaScore gave the film an average grade of "B+" on an A+ to F scale.

Writing for IndieWire, David Ehrlich gave the film a grade of B and said, "If Greengrass' broadly entertaining (if gallingly relevant) film is a bit too soft and spread thin to hit with the emotional force that it could, so much of its simple power is owed to the grounded nature of the director's approach, which allows these desperate characters to feel as if they're trying to escape the very genre that threatens to define them forever."

A.A. Dowd of The A.V. Club gave the film a "B–" and wrote:"Ultimately, News Of The World lives and dies on the presence of its iconic headliner, on the Hanks of it all. That's the most old-fashioned thing about it: It's a true star vehicle, practically a tribute to his enduring appeal. Yet for as comforting as Hanks is in the role, and for as much as he sells the poignancy of the film's bittersweet final stretch, the film feels almost too built around his signature nobility to ever gain much in the way of actual drama."

Mark Kermode of The Observer awarded the film 4/5 stars and wrote, "Having emerged from news documentaries to become a peerless director of vivid real-life dramas (Bloody Sunday, United 93) and frenetically visceral adventures (The Bourne franchise), Greengrass relishes the opportunity to take a more languorous attitude to character development and location, a quality that seems to have confounded some fans of the director’s more urgent fare. Yet I found this a rewarding and entertaining drama, heavy with the weight of the past, yet buoyed up by the possibilities of the future."

Contrasting views display the comments on the movie by Philipp Emberger, the critic of ORF, the Austrian Broadcasting Corporation: under the title "Helena Zengel Overpowering Tom Hanks", he describes her scenes as the highlights of the film, compared to Tom Hanks's solos that seem "arduously one-dimensional", concluding that "Tom Hanks delivers a lot of forgivingness, besides the Dad-vibes", which makes the film "a quiet and steady Western with elements of road-movie, beautiful pictures of landscapes, a relevant topic, lots of heart, and a star named Helena Zengel." Peter Bradshaw of The Guardian gave the film 2/5 stars, writing that although Hanks's "persona here is equable and easy-going, qualities which are of course necessary to his sympathetic brand identity, he doesn’t plausibly change in any dramatic way", and describing the film as a "handsomely shot but stolid and blandly self-satisfied western".

A.O Scott of The New York Times gave a similarly mixed review, writing that "this isn't a bad movie. The problem is that it's too nice a movie, too careful and compromised, as if its makers didn't trust the audience to handle the real news of the world."

Tom Gliatto of People named it the fifth best film of the year.

News of the World - A Look Inside
Inside Look