View src
watch 01:33
House of the Dragon Trailer - The Loop
Do you like this video?
Play Sound
Nightcrawler 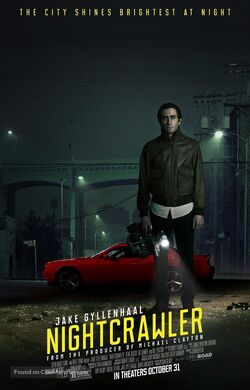 Nightcrawler is a 2014 American neo-noir crime drama thriller film written and directed by Dan Gilroy in his directorial debut. The film stars Jake Gyllenhaal as a thief who starts shooting footage of accidents and crimes in Los Angeles and selling it to news channels. It features Rene Russo, Riz Ahmed, and Bill Paxton.

The film had its world premiere at the Special Presentations section of the 2014 Toronto International Film Festival. It was released theatrically by Open Road Films on October 31, 2014. Nightcrawler received universal acclaim with many praising Gyllenhaal's performance and Gilroy's script. At the 87th Academy Awards, the film was nominated for Best Original Screenplay.

Caught stealing from a Los Angeles construction site, Louis "Lou" Bloom (Jake Gyllenhaal) attacks a security guard and steals his watch. After negotiating a price for the stolen material at a scrap yard, Bloom asks for a job, but the foreman at the scrap yard tells him that he will not employ a thief.

Inspired by a freelance film crew he sees working the scene of a car crash, led by cameraman Joe Loder (Bill Paxton), Bloom steals a racing bicycle and trades it for a camcorder and a radio scanner. That night Bloom shoots the aftermath of a carjacking, moving up close and filming the victim's death to compete with Joe Loder's higher quality footage. Lou gets both him and Loder kicked off the crime scene, and they become rivals and competitors. Bloom offers the footage to a local TV station. The morning news director, Nina Romina (Rene Russo), buys the footage and encourages Bloom to continue his work. She stipulates that the station is most interested in footage of violent incidents in affluent neighborhoods since these attract the most viewers. Bloom hires an assistant, Rick Carey (Riz Ahmed), a young man desperate for money, and begins his career as a professional stringer.

To get better footage, Bloom alters crime scenes, in one case moving the body of a car crash victim to make a better shot. However, Loder beats Bloom to several important stories and has access to more advanced equipment. Bloom's work begins to gain traction, and he purchases better equipment and trades his old 1985 Toyota Tercel for a faster and brand-new Dodge Challenger. Bloom threatens to end his business relationship with Romina unless she has sex with him, knowing her job depends on his footage. The next day he turns down a business offer from Loder, who beats him to an important plane crash story later that night. Romina explodes in anger at Bloom, demanding he get footage that viewers "can't turn away from" and keep his end of their bargain. Bloom sabotages Loder's van, causing him to crash into a telephone pole and become gravely injured.

Later that night, Bloom and Carey arrive at the site of a home invasion in an affluent neighborhood before the police. Bloom records footage of the gunmen leaving in their SUV and of the murder victims in the house. The news staff worry that airing the footage is unethical, but Romina is eager to break the story. In exchange, Bloom demands public credit and more money. The police become suspicious of Bloom and ask for his footage of the home invasion. He gives them an edited tape, withholding footage identifying the gunmen, then locates the gunmen himself. With Carey, he stakes them out at a restaurant, planning to tip off the police and film the confrontation. Scared, Carey demands half the money Bloom stands to make, threatening to tell the police about Bloom's illegal activities. Bloom agrees, but demands Carey get out of the car to shoot a supporting angle. Fearing a dangerous confrontation between police and the suspects, Carey initially refuses to leave, but he complies when Bloom threatens him with violence.

The police arrive at the restaurant and exchange gunfire with the gunmen. One is killed and the other escapes in the SUV. The police give chase, with Bloom and Carey tailing and recording. After the gunman's SUV crashes, Bloom urges Carey to film the gunman, claiming he is dead. The wounded gunman shoots Carey and tries to escape but is shot by police. As Carey lies dying, Bloom films him and tells him that he cannot work with someone he does not trust.

Romina is awed by the footage and expresses her devotion to Bloom. The news team discovers that the "home invasion" was actually a drug deal gone wrong; Romina omits this information to maximize the story's impact. Police try to confiscate the footage for evidence, but Romina defends her right to withhold it. Interrogated by police detective Fronteiri (Michael Hyatt), Bloom fabricates a story about the men in the SUV following him; Fronteiri suspects he is lying, but she cannot prove it. Bloom invests in two vans and hires a team of interns to expand his business.

Gyllenhaal was the first actor to sign on, in April 2013. The film was not one of the 31 projects originally selected by the California Film Tax Credit program June for $100 million in credits via a lottery from 380 applications, but it did receive a $2.3 million allocation. Bill Paxton and Rene Russo signed for the film in September 2013, followed by the casting of Riz Ahmed as Gyllenhaal's "driver and protege". Kevin Rahm joined the cast as a News Channel editor in October 2013. Principal photography began on October 6, 2013 in Los Angeles and lasted 27 days. Gyllenhaal lost 20 lb (9.1 kg) for his role. The full production process took approximately 27 weeks from first shot to picture lock.

Nightcrawler received universal acclaim and is often considered one of the best films of 2014. On review aggregator website Rotten Tomatoes, the film holds a score of 95% "Certified Fresh", based on 223 reviews, with a rating average of 8.2/10. The site's critical consensus reads: "Restless, visually sleek, and powered by a lithe star performance from Jake Gyllenhaal, Nightcrawler offers dark, thought-provoking thrills." On Metacritic, another review aggregator, the film has a score of 76 out of 100, based on 45 critics, indicating "universal acclaim".