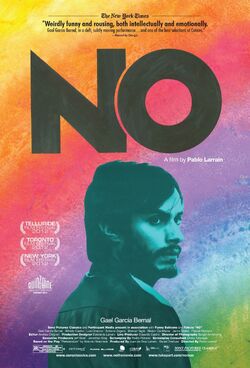 No is a 2013 Chilean film directed by Pablo Larraín. Mexican actor Gael Garcia Bernal plays René, an in-demand advertising man working in Chile in the late 1980s. The film is based on the play "El Plebiscito", written by Antonio Skármeta. At the 85th Academy Awards the film has been nominated for Best Foreign Language Film.

Based on a true story, when Chilean military dictator Augusto Pinochet, facing international pressure, calls for a referendum on his presidency in 1988, opposition leaders persuade a brash young advertising executive, Rene Saavedra, to spearhead their campaign. With scant resources and constant scrutiny by the despot’s watchmen, Saavedra and his team devise an audacious plan to win the election and free their country from oppression.

Retrieved from "https://movies.fandom.com/wiki/No?oldid=74574"
Community content is available under CC-BY-SA unless otherwise noted.