watch 01:12
The Loop (Movies)
Do you like this video?
No Country for Old Men 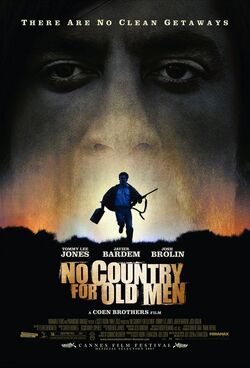 No Country for Old Men is a 2007 neo-noir Western thriller film based on the 2005 novel of the same name by Cormac McCarthy, and written and directed by the Coen brothers, and starring Tommy Lee Jones, Javier Bardem and Josh Brolin.

The film follows a welder who finds a case full of money at the site of a botched drug deal, who is then pursued by a psycopathic hitman.

The film won four awards at the 80th Academy Awards, including Best Picture and Best Director for the Coen Brothers, and was widely regarded as being the best film of 2007.

In rural Texas, welder and hunter Llewelyn Moss discovers the remains of several drug runners who have all killed each other in an exchange gone violently wrong. Rather than report the discovery to the police, Moss decides to simply take the two million dollars present for himself. This puts the psychopathic killer, Anton Chigurh, on his trail as he dispassionately murders nearly every rival, bystander and even employer in his pursuit of his quarry and the money. As Moss desperately attempts to keep one step ahead, the blood from this hunt begins to flow behind him with relentlessly growing intensity as Chigurh closes in. Meanwhile, the laconic Sherrif Ed Tom Bell blithely oversees the investigation even as he struggles to face the sheer enormity of the crimes he is attempting to thwart.

No Country for Old Men - Official Trailer
Add a photo to this gallery
Retrieved from "https://movies.fandom.com/wiki/No_Country_for_Old_Men?oldid=162010"
Community content is available under CC-BY-SA unless otherwise noted.