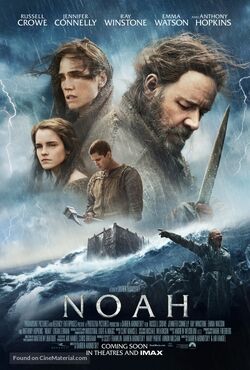 Noah (2014) is an American biblical epic film directed by Darren Aronofsky and written by Aronofsky and Ari Handel. Starring Russell Crowe, Anthony Hopkins, Emma Watson, Jennifer Connelly, Douglas Booth, Logan Lerman, and Ray Winstone, the film is based on the story of Noah's Ark and is set to be released in theaters on March 28, 2014.

The Biblical Noah suffers visions of an apocalyptic deluge and takes measures to protect his family from the coming flood.

Aronofsky first discussed Noah with The Guardian in April 2007, telling the paper that the figure of Noah had fascinated him since he was thirteen years old. Aronofsky explained that he saw Noah as "a dark, complicated character" who experiences "real survivor's guilt" after the flood. Aronofsky was working on early drafts of the script for Noah around the time his first attempt to make The Fountain fell through when actor Brad Pitt left the project.

Ari Handel – Aronofsky's collaborator on The Fountain, The Wrestler and Black Swan – helped Aronofsky develop the script. Before they found financial backing for Noah, they collaborated with Canadian artist Niko Henrichon to adapt the script into a graphic novel. The first volume of the graphic novel was released in the French language by Belgian publisher Le Lombard in October 2011 under the title Noé: Pour la cruauté des hommes (Noah: For the Cruelty of Men). After the creation of the graphic novel, Aronofsky struck a deal with Paramount and New Regency to produce a feature film of Noah with a budget of $130 million. Screenwriter John Logan was called in to re-draft the script alongside Aronofsky, but is not credited for his contributions.

Aronofsky had previously offered the role of Noah to Christian Bale and Michael Fassbender, both of whom declined. Christian Bale went on to star as Moses in Ridley Scott's upcoming religious epic film Exodus.

Dakota Fanning was originally cast in the role of Ila, but departed due to a scheduling conflict.

Julianne Moore was also considered for the role of Naameh.

Liam Neeson, Liev Schreiber and Val Kilmer were also considered for the part of Tubal-cain, but Aronofsky reportedly wanted an actor "with the grit and size to be convincing as he goes head-to-head against Crowe's Noah character".

Principal photography began in July 2012, in Dyrhólaey, Fossvogur, Reynisfjara and other locations in Southern Iceland.

Filming also took place in New York state. A set representing Noah's Ark was built at the Planting Fields Arboretum in Upper Brookville, New York. In September 2012, while on break from a location on Long Island, Russell Crowe and a friend, both of whom had been kayaking for several hours, were rescued by the Coast Guard near Cold Spring Harbor. Production was put on hold while Hurricane Sandy went through the East Coast during late October 2012.

Speaking of the film's extensive use of visual effects, Aronofsky said he and his crew "had to create an entire animal kingdom", using no real animals in the production but instead "slightly tweaked" versions of real creatures. Industrial Light and Magic said their work on the film represented "the most complicated rendering in the company's history".

The film will be scored by Clint Mansell, who composed the music for all of Aronofsky's previous feature films.