watch 02:03
Wiki Targeted (Entertainment)
Do you like this video?
Play Sound
Norm of the North 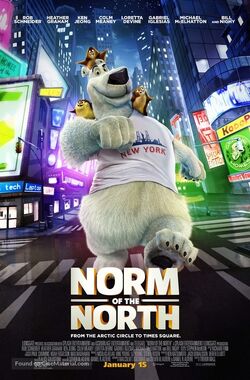 Norm (Rob Schneider) the polar bear doesn't know how to hunt, but he does possess the unique ability to talk to humans. When the wealthy Mr. Greene (Ken Jeong) unveils his idea to build luxury houses in the Arctic, Norm realizes that his beloved home is in jeopardy. Accompanied by three mischievous lemmings, Norm stows away on a ship to New York. Once there, he meets a surprising ally (Maya Kay) who helps him hatch a scheme to sabotage the developer's unscrupulous plans.

Retrieved from "https://movies.fandom.com/wiki/Norm_of_the_North?oldid=163496"
Community content is available under CC-BY-SA unless otherwise noted.