Notes on a Scandal

Edit
watch 01:23
Wiki Targeted (Entertainment)
Do you like this video?
Play Sound
Notes on a Scandal 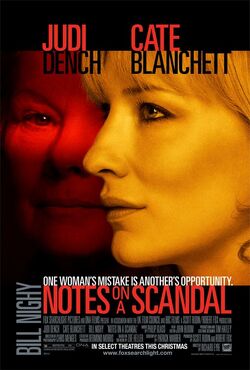 Notes on a Scandal is a 2006 British psychological thriller film directed by Richard Eyre. The cast of the film consists of Judi Dench and Cate Blanchett.

The film was released on December 25, 2006 by Fox Searchlight Pictures.

Barbara Covett is a history teacher at a comprehensive school in London. A spinster nearing retirement, her only comfort is her diary. When a new art teacher, Sheba Hart, joins the staff, Barbara is immediately attracted to her. Sheba is married to the much older Richard, and is just re-entering the work force after devoting herself to her special needs son.

Barbara later witnesses Sheba in a sexual encounter with a 15-year-old student named Steven Connolly at a school Christmas concert celebration. When Barbara confronts her, she recounts all the details of her involvement with the boy, and Sheba asks her not to tell the school administration until after Christmas, as she wants to be with her family. Barbara claims she has no intention of reporting her, providing Sheba ends the relationship immediately. Sheba tells Steven that the affair is over. However, when she refuses to give in to Barbara's demands on her time, Barbara reveals the secret to a male teacher. He tells her that he is attracted to Sheba and asks her to act as an intermediary. After the affair becomes public, Barbara and Sheba both lose their jobs. The head teacher, Sandy Pabblem, suspects that Barbara knew about the affair and did not notify the authorities, and also learned that a former teacher at the school had taken out a restraining order against Barbara for stalking her and her fiance.

Sheba is thrown out of her home by her husband, and moves into Barbara's house. Sheba is unaware that Barbara is the reason she was found out, believing the affair became known because Steven confessed it to his mother. When Sheba finds Barbara's diary and learns it was Barbara who leaked the story of the affair, she confronts Barbara and strikes her in anger. A row ensues, and Sheba runs outside with Barbara's journal to a crowd of reporters and photographers. When she becomes hemmed in by them, Barbara rescues her.

Sheba's emotions spent, she quietly tells Barbara that she had initiated the friendship with her because she liked her and that they could have been friends. She leaves Barbara, placing the journal on the table, and returns to her family home. Richard and Sheba face one another silently for several moments, and then Richard allows her to enter. Sheba is subsequently sentenced to 10 months in prison.

Later, Barbara meets another younger woman who is reading a newspaper about the Sheba Hart affair. Barbara says she was acquainted with Sheba, but implies they hardly knew each other. Barbara introduces herself, invites the other woman to a concert, and the pair continue to talk.