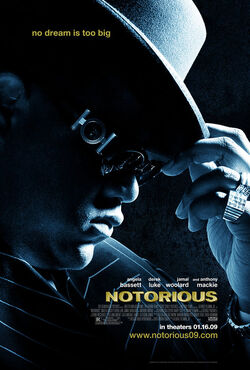 Notorious is a 2009 American biographical drama film directed by George Tillman Jr. that follows the life and murder of Christopher Wallace, an American rapper better known by the stage name "The Notorious B.I.G.". The film stars Jamal Woolard, Angela Bassett, Derek Luke, and Anthony Mackie, and was released by Fox Searchlight Pictures.

The film opens at a party in Los Angeles on March 9, 1997. Just as The Notorious B.I.G. is about to be killed in a shooting, the film flashes back to Biggie's childhood in Brooklyn, New York where he lived during his childhood years as a hard-working school student, but begins dealing drugs. Chris, now older, sells drugs at the height of the crack epidemic, hustling with his friends, "D-Roc" and Lil' Cease.

When his girlfriend, Jan Jackson, tells him that she is pregnant, he takes drug dealing more seriously, so he can earn more money to support his growing family. Christopher eventually participates in a rap battle, where he wins, but his mother, Voletta Wallace, kicks him out of the house after finding drugs underneath his bed and also, the fact letters were sent home about him not attending school.

Chris gets caught with guns and drugs, and serves nine months in jail before being bailed out. Christopher meets Kim Jones, but Kim refuses to pursue a relationship with him due to her abusive past. After reconciling with his mother and visiting his newborn daughter, T'yanna, he records a demo under the name "Biggie Smalls", which catches the attention of Puff, an ambitious record producer working for Uptown. Puffy promises him a record deal but Biggie finds out that Puffy was fired by Uptown, to his disappointment. Soon afterwards, he and D-Roc are again arrested for possessing a gun, but D-Roc takes the blame to allow Biggie to pursue his music career.

Biggie becomes depressed when he finds out his mother has been diagnosed with breast cancer, but is cheered up when Puffy signs him to his newly established record label, Bad Boy, and he records his debut album, Ready to Die. At a Bad Boy photoshoot, Biggie meets R&B singer Faith Evans. The pair begin a relationship, and gets married on August 9, 1994. However, Faith catches him cheating. The two later reconcile but the tensions between Biggie, Faith, Jan, and Kim continue to grow.

Biggie meets Tupac Shakur at a party celebrating the release of Ready to Die. Biggie admires 2Pac, but questions people he associates with, telling him to watch the company he keeps while he's in New York. When 2Pac is robbed and shot five times at Quad Studios, he blames Bad Boy. At The Source Awards in 1995, Suge Knight makes a speech dissing Bad Boy Records.

After altercations between the two rappers, the disagreement escalates into the media referring to an "East Coast-West Coast rivalry" and attacks are made on both sides. At the 1996 Soul Train Awards in Los Angeles, Biggie receives a death threat from an unknown caller. At the afterparty, 2Pac and Suge Knight verbally assault Biggie, but leave when Biggie's security threatens them.

A song called "Who Shot Ya?" is released by Biggie, which is interpreted as a diss track by 2Pac. Biggie and Puffy claim that "Who Shot Ya?" was recorded before 2Pac was shot, but 2Pac responds with "Hit 'Em Up" where he diss Biggie, Puffy, Junior Mafia and the rest of the Bad Boy entourage. 2Pac also says he slept with Faith. After seeing a magazine photo of 2Pac and Faith together, Biggie confronts Faith but she insists nothing happened between her and 2Pac.

Biggie and Faith attempt to reconcile after she tells him that she is pregnant with his son, CJ Wallace on October 29, 1996. The rivalry between the East and West Coast continues to escalate. At a concert in Sacramento, California, Biggie gets booed. After this, Biggie performs "Who Shot Ya?". The rivalry between Biggie and 2Pac continues until 2Pac is killed in Las Vegas, Nevada. Voletta tells Biggie that 2Pac was probably killed as a result of their feud, which shakes him up. Biggie attempts to ease the tensions in his life by visiting Jan and T'Yanna more often.

Biggie and D-Roc renew their friendship after D-Roc is released from prison, and Biggie confides to him that he wants out the rap game. However, Biggie decides to go to Los Angeles to promote his upcoming album Life After Death, bringing D-Roc and Lil' Cease with him, along with Puff Daddy and Faith. While out in L.A., Biggie receives more death threats. After calling Lil' Kim to apologize and arrange a meeting with her, he leaves the party. The film returns to the opening scene, where Biggie is killed by an unknown assailant.

His funeral is held a few days later, where friends and colleagues mourn, along with thousands of fans, who line the streets to pay their respects. A member of the crowd turns on a ghetto blaster which plays Biggie's song "Hypnotize" and the crowd dances as Biggie's casket is driven down the city's streets.

Antoine Fuqua was originally set to direct before director George Tillman, Jr. signed on to direct the project. The film was distributed by Fox Searchlight Pictures. Producers on Notorious include Sean Combs, Voletta Wallace and Biggie's former managers Wayne Barrow and Mark Pitts

In early October 2007, open casting calls for the role of The Notorious B.I.G. began. Actors, rappers and members of the public all participated. Rapper Beanie Sigel auditioned for the role but was not picked. Eventually it was announced that rapper Jamal Woolard was cast as Biggie (he would also play Biggie in the Tupac biopic All Eyez on Me). Other cast members include Angela Bassett as Voletta Wallace, Derek Luke as Sean Combs, Antonique Smith as Faith Evans, Naturi Naughton formerly of 3LW as Lil' Kim, Dennis L.A. White as D-Roc and Anthony Mackie as Tupac Shakur. An unknown actor also portrays Craig Mack in a scene as well. Principal photography began in March 2008.

On Rotten Tomatoes, the film has an approval rating of 51% based on 142 reviews, with an average rating of 5.5/10. The site's critical consensus reads, "A biopic that lacks the luster of its subject, Notorious is generic rise-and-fall fare that still functions as a primer for those less familiar with the work and life of the hip hop icon." At Metacritic, which assigns a normalized rating, the film has a score of 60 out of 100, based on 32 critics, indicating "mixed or average reviews". Some critics have noted that the first half of the film tells exactly the same story that the (2005) film Get Rich or Die Tryin' had.

Roger Ebert gave the film three and a half out of four stars, applauding the film focusing on Christopher Wallace and not his rapping persona.

Lil' Kim was not happy about how she was portrayed in the film, saying "Regardless of the many lies in the movie and false portrayal of me to help carry a story line through, I will still continue to carry his legacy through my hard work and music." She felt the producers were more interested in her "character" than her. Lil' Kim scenes in the film contained a lot of nudity and sexuality. The film's producers, including Voletta Wallace, downplayed her comments. Purportedly, producers attempted to get Lil' Kim's input during production but she never returned calls. Producers went with stories from Wallace's friends of how she and Wallace met.

Retrieved from "https://movies.fandom.com/wiki/Notorious_(2009)?oldid=136078"
Community content is available under CC-BY-SA unless otherwise noted.