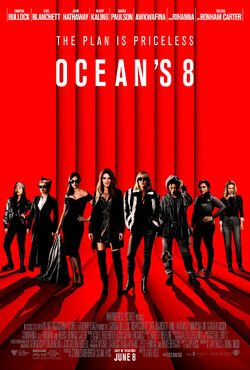 Ocean's 8 is a heist film that serves as a spin-off, as well as a sequel to the Ocean's Trilogy. The film was directed by Gary Ross, and stars Sandra Bullock, Cate Blanchett, Anne Hathaway, Mindy Kaling, Sarah Paulson, Awkwafina, Rihanna, and Helena Bonham Carter. It was released on June 8, 2018.

Retrieved from "https://movies.fandom.com/wiki/Ocean%27s_8?oldid=156677"
Community content is available under CC-BY-SA unless otherwise noted.