Start a Wiki
watch 01:27
The Loop (Movies)
Do you like this video?
Oliver Stone 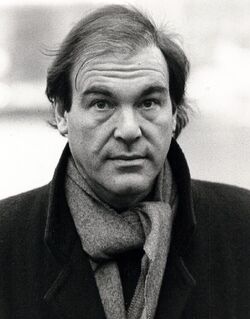 Oliver Stone is an American film director and screenwriter. Stone came to prominence as a director with a series of films about the Vietnam War, in which he had participated as an infantry soldier, and his work continues to focus frequently on contemporary political and cultural issues. His work has earned him three Academy Awards. His first Oscar was for Best Adapted Screenplay for Midnight Express (1978). He won Academy Awards for Directing Platoon (1986) and Born on the Fourth of July (1989), both of which were centered on the Vietnam War. He also directed Natural Born Killers (1994).

By December 1993, Don Murphy and Jane Hamsher (producers of Natural Born Killers) had successfully pitched the idea of a Planet of the Apes revival to 20th Century Fox. Oliver Stone met with Murphy and Hamsher and told them, having re-watched the original movie cycle, that he thought they were "awful", but he nevertheless signed on as executive producer/co-writer for the new movie.[1] Stone's preference was for a story based on apes from an ancient civilization, with biblical connections. He explained in December 1993, "It has the discovery of cryogenically frozen Vedic Apes who hold the secret numeric codes to the Bible that foretold the end of civilizations. It deals with past versus the future. My concept is that there's a code inscribed in the Bible that predicts all historical events. The apes were there at the beginning and figured it all out."[2]

Stone recruited Australian Terry Hayes to write the screenplay, having previously had hits with Dead Calm, Mad Max 2: The Road Warrior and Mad Max: Beyond Thunderdome.[1] In March 1994, Stone secured the interest of Arnold Schwarzenegger. Schwarzenegger anticipated a violent, gory interpretation of Stone's conspiracy-theory concept.[1] Titled Return of the Apes, Hayes' screenplay was set in the near future where a plague is making humans extinct. A geneticist time travels with a pregnant colleague to a time when Palaeolithic humans were at war for the future of the planet with highly-evolved apes.

Phillip Noyce (Dead Calm, Patriot Games, Clear and Present Danger) was selected as director in January 1995, and pre-production was planned with a $100 million budget.[4] Stone first approached Rick Baker to design the prosthetic makeup, but eventually opted for Stan Winston. A later, uncorroborated, rumor claimed that Ben Kingsley was in line for the role of the scientist who travels back in time, with Schwarzenegger cast as the leader of the Stone Age men in the distant past - a role perhaps more suited to the muscular action figure.

Although Peter Chernin called Hayes' time-travel action screenplay "one of the best scripts I ever read", Fox became frustrated by the distance between their approach and Hayes' interpretation. As Don Murphy put it, "Terry wrote a 'Terminator' and Fox wanted 'The Flintstones'". Dissatisfied with Fox's decision to fire Hayes, Phillip Noyce left Return of the Apes in February 1995. Oliver Stone switched his attention to other film projects, but remained on board officially. In practice he never returned to the production. Don Murphy and Jane Hamsher were bought off the project by Fox.

Retrieved from "https://movies.fandom.com/wiki/Oliver_Stone?oldid=44579"
Community content is available under CC-BY-SA unless otherwise noted.