Start a Wiki
watch 16:45
The Loop (Movies)
Do you like this video?
Once Upon a Time in Hollywood 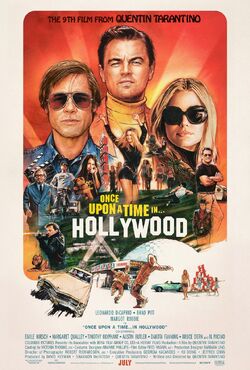 Once Upon a Time in Hollywood (stylized as Once Upon a Time in... Hollywood) is a 2019 comedy-drama film written and directed by Quentin Tarantino. The cast of the film consists of Leonardo DiCaprio, Brad Pitt, Margot Robbie, Emile Hirsch, Margaret Qualley, Timothy Olyphant, Austin Butler, Dakota Fanning, Bruce Dern, and Al Pacino.

The film was released in the United States on July 26, 2019 by Sony Pictures Releasing.

In 1969 Los Angeles, actor Rick Dalton, the former star of the 1950s Western television series Bounty Law, finds his career faltering due to ongoing alcoholism issues. Dalton laments to Cliff Booth, his best friend and stunt double, that his career is over. Booth, a war veteran who lives in a derelict trailer next to a drive-in in Van Nuys, attempts to bolster Dalton's self-confidence. Meanwhile, actress Sharon Tate and her husband Roman Polanski have just moved into the home next door to Dalton's. Dalton hopes to befriend the couple and use Polanski to restore his leading man status.

During a day off, Booth picks up a young hitchhiker in Dalton's car, driving her home to Spahn Ranch. She insists that he stays and meets Charles Manson, but Booth is suspicious of the large number of hippies squatting on the property, as he once worked on the lot with owner George Spahn. He insists on seeing the now-blind Spahn despite the women's objections; Spahn dismisses Booth's suspicion that he is being taken advantage of and asks him to leave. Returning to his car, Booth discovers that one of the front tires has been popped by a knife; he heavily beats Steve Grogan, the young man responsible and forces him to change the tire. One of the women goes to fetch Tex Watson to handle the situation, but Booth is already driving away by the time Watson arrives.

Having become a day player on several TV series, Dalton, playing a black-hatted villain on a new series called Lancer, gets into a philosophical chat about acting with his eight-year-old method actress co-star. That same evening, after watching his performance as a guest star on an episode of F.B.I., casting agent Marvin Schwarzs offers Dalton the opportunity to shoot a Spaghetti Western in Rome. The prospect fills Dalton with despair; he thinks Spaghetti Westerns are the bottom rung of the entertainment totem pole. Dalton takes Booth to the six-month shoot in Rome, making several films while eventually marrying a young Italian actress, Francesca Cappucci.

After returning to Los Angeles, Dalton informs Booth that he can no longer afford his services, and they agree to go their separate ways. They go out to get a drink together one last time, later returning to Dalton's home to drink. Booth smokes an acid-laced cigarette that he bought on the street six months ago. Later that night, Dalton confronts Watson, along with Susan Atkins, Linda Kasabian and Patricia Krenwinkel, who have parked outside his home and are preparing to kill Tate and her friends, Jay Sebring, Wojciech Frykowski, and Abigail Folger. They drive off, only to come back with a new plan of killing Dalton, as he was the star of TV series in which he killed people. Atkins points out that most series portray murder, that it was television that has taught her to kill, and that it is time to get revenge on Hollywood. A nervous Kasabian gets cold feet and deserts them, and the remaining trio proceeds with the plan. Upon entering the house, Watson confronts Booth, who is high on acid. Booth recognizes the trio from the ranch, making them nervous. In the ensuing fight, Booth and his pitbull manage to kill Krenwinkle and Watson while severely injuring Atkins, who stumbles outside into the pool. She alarms Dalton, who had been floating there listening to music in his headphones, unaware of the commotion inside. He climbs out of the pool and retrieves a flamethrower he'd kept from a previous film shoot, burning her to death. Booth is taken to the hospital for his non-lethal injuries, while Dalton strikes up a conversation with Sebring next door, and is invited up to Tate's house for drinks.

Retrieved from "https://movies.fandom.com/wiki/Once_Upon_a_Time_in_Hollywood?oldid=188004"
Community content is available under CC-BY-SA unless otherwise noted.