Start a Wiki
watch 01:27
The Loop (Movies)
Do you like this video?
Ordinary People 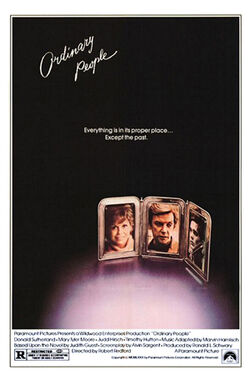 The story concerns the disintegration of an upper-middle-class family in Lake Forest, Illinois, following the death of the older son in a boating accident. The screenplay by Alvin Sargent was based upon the 1976 novel Ordinary People by Judith Guest.

The film was a critical and commercial success, winning that year's Academy Award for Best Picture as well as three other Oscars, including one for Timothy Hutton.

Teen-aged brothers and best friends Buck and Conrad Jarrett were involved in a boating accident which claimed Buck's life. Shortly thereafter, Conrad tried to commit suicide. After a four month hospitalization, Conrad is back in his upper middle class suburban Chicago home with his parents, Calvin and Beth Jarrett. The Jarretts collectively are publicly trying to get on with their lives, Conrad who is back at high school in his senior year partaking in his old activities such as the swim team and choir. But things in the Jarrett household are not all right. Although stating he is unsure why he decides to do so, Conrad restarts his psychiatric therapy outside of the hospital with Dr. Berger. This therapy may be able to uncover the reasons for the Jarrett's collective unhappiness, and leads each to examine not only the overall family dynamic but the individual relationships with each of the other two.

Retrieved from "https://movies.fandom.com/wiki/Ordinary_People_(1980)?oldid=112484"
Community content is available under CC-BY-SA unless otherwise noted.