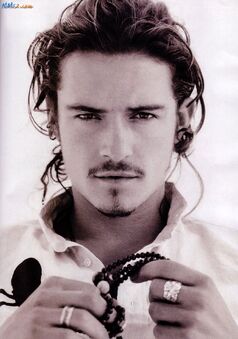 Name
Orlando Bloom
Birthplace
Canterbury, Kent, UK
Birth date
January 13, 1977
Occupation
Actor
Notable Films
The Lord of the Rings: Fellowship of the Ring, Pirates of the Caribbean: The Curse of the Black Pearl

Orlando Bloom (born January 13, 1977 in Canterbury, Kent, England) was the actor who played Legolas in the Lord of the Rings films by Peter Jackson.

Following his role as Legolas, he took on parts in films such as Troy, Kingdom of Heaven and Elizabethtown. Aside from Legolas, he is best known for the role of Will Turner in the Pirates of the Caribbean films.

As of November 2014, Orlando Bloom has been in a total of two Billion Dollar Films, which include The Lord of the Rings: The Return of the King and Pirates of the Caribbean: Dead Man's Chest, with a net worth of $35 million.

Born on January 13, 1977 in Canterbury, England, Orlando Bloom's plans of becoming an actor developed quite early when he realized that the characters on TV and in the movies weren't real, that they were actors. "Once I realized that I could be Superman or I could be The Hustler or I could be Daniel Day Lewis's character in The Last Of The Mohicans - I was like, "Man, I can become an actor and be all of those things." In 1993, he moved to London to improve his career, doing bit parts in TV series like "Casualty". Orlando spent two years at the National Youth Theatre before getting a scholarship to train with the British American Drama Academy. His first memorable appearance, a cameo in the critically acclaimed movie Wilde in 1997, earned him various film offers, which he all turned down in favor to play theatre. After Wilde, Orlando attended the Guildhall School of Music and Drama for 3 years. On stage, he appeared in plays like "The Seagull", "Twelfth Night", and "Trojan Women".

Orlando's first major movie role was in The Lord of the Rings trilogy, playing the ethereal elf Legolas Greenleaf, a role he received only days before graduating drama school in London. Two years later, when The Fellowship of the Ring premiered, audiences were in instant awe of the blonde haired, blue eyed elf with killer cheek bones, who was also handy with a bow and arrow. It didn't take long for Orlando to become a full fledged teen heartthrob, hailed by magazines as "The next big thing". In interviews and magazines, fans discovered that off-screen, Orlando was quite different than his movie counterpart. With brown eyes, dark hair, olive skin, and a keen yet quirky fashion sense, he looked right at home on the cover of GQ. Unlike the quiet Legolas, Orlando was full of energy and infectious enthusiasm, charming everyone he worked with, along with the fans. In interviews, he described himself as an adrenaline junky; skydiving, bungee jumping, surfing and snowboarding in his spare time. This live life to its fullest concept seems to come partly from a brush with death that Orlando had while in drama school. Falling 3 stories from a friend's roof terrace, Orlando faced the possibility of never walking again, but was able to walk out of the hospital 12 days later.

A walking miracle, Orlando seemed to be on the road to mega-stardom. Released shortly after the The Fellowship of the Ring was the gritty war drama, Black Hawk Down, directed by Ridley Scott. Orlando played Private First Class Todd Blackburn, and showed the enthusiasm, excitement and nervousness of an 18 year old soldier new to the world of war in Somalia. Shadowing a real life experience, his character falls from a helicopter and breaks his back. His next role was that of Joe Byrne in Ned Kelly, a historical biopic of the infamous Australian outlaw. Even though the movie had a limited release, the reviews were positive for Orlando's portrayal of Ned Kelly's right hand man. Next came the swashbuckling blockbuster Pirates of the Caribbean: The Curse of the Black Pearl, which cemented Orlando's place as the action movie "It Boy". Playing the dashing yet straight-laced blacksmith, Will Turner, Orlando won even more hearts by showing off his sword fighting skills alongside his idol, Johnny Depp, while romancing the film's heroine played by Keira Knightley. In 2004 came another period action movie, Troy. Although the role of Paris saw Orlando again using a sword and bow, it was a departure from his past roles. Paris was an anti-hero, young and foolish at times, sacrificing all for love. Also released in 2004, although only limited in Europe, was the indie film The Calcium Kid, a mockumentary comedy about a milkman who becomes a boxer. Orlando was able to show off his comedic skills while playing a modern character, with no weapons or costumes. The indie film Haven also made its debut at the 2004 Toronto Film Festival. Orlando both starred in and co-produced the film. It has yet to be released into theaters.

Orlando's first starring role in a major production was in Kingdom of Heaven, released in 2005. Although the film was considered a box office disappointment, the reviews of Orlando's acting were positive. He was able to convey the inner turmoil of a man on a journey of spiritual and self-discovery. Orlando's next starring role will be that of Drew Baylor in Elizabethtown. A modern comedic drama written and directed by Cameron Crowe. A sequel to Pirates of the Caribbean titled Pirates of the Caribbean: Dead Man's Chest was released in Summer 2006.