Moviepedia
Register
Don't have an account?
Sign In
Advertisement
in: Rated PG-13, Films, Films shot in Vancouver,
and 15 more 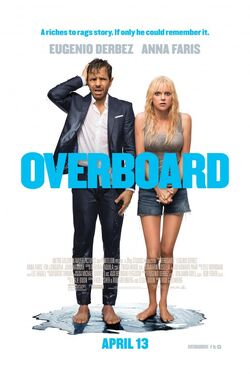 Overboard is a 2018 American romantic comedy film directed by Rob Greenberg. The screenplay was written by Greenberg, Bob Fisher, and Leslie Dixon, and the film stars Eugenio Derbez, Anna Faris, Eva Longoria, John Hannah, and Swoosie Kurtz. It is a remake of the 1987 Metro-Goldwyn-Mayer film of the same title but with the roles reversed, where a struggling, working-class single mother convinces a rich playboy with amnesia that they are married.

Overboard was released in the United States on May 4, 2018, surpassing analysts predictions by grossing close to $92 million worldwide, against a modest budget of $12 million. The film received unfavorable reviews from critics, who praised Faris's comedic performance but criticized the mediocre story that added nothing new to the original. Overboard was Mexico’s fifth-highest-grossing picture of 2018, and placed 34th on the list of worldwide grosses for the same period.

Kate Sullivan is a single mom of three daughters who works two jobs while studying to be a nurse. She is assigned to clean carpets on a yacht owned by spoiled, arrogant playboy Leonardo 'Leo' Montenegro. Leo makes rude remarks towards Kate and fires her without pay when she refuses to bring him food. When Kate calls out his behavior, Leo pushes her off the boat along with her cleaning equipment.

Meanwhile, in Mexico, Leo's sisters Magdalena and Sofia are tending to their ailing father. Furious when Leo is announced as his successor to run the family-owned company, Magda decides to visit him. That night, Leo slips off the yacht and falls into the ocean unnoticed. He wakes up on a beach with amnesia and no recollection of his identity. He wanders through town and eventually reaches the hospital. Magda finds him and leaves him there unclaimed after learning he has amnesia. She returns home and falsely reports that Leo has died. Sofia suspects Magda is lying.

Kate and her friend Theresa see a news report on Leo's situation. To compensate Kate for Leo's earlier misdeeds, they scheme to take advantage of his amnesia by tricking him into believing he's married to Kate. They go to the hospital and convince Leo of the ruse when Kate correctly identifies a tattoo on his rear, a detail she noticed on the yacht. Kate takes him home and introduces him to her girls, making up details about their alleged life together. Kate sets Leo up with an exhausting construction job working for Theresa's husband Bobby.

Leo eventually develops a bond with the girls. Kate begins to feel guilty and considers telling Leo the truth, but changes her mind after seeing how much the girls enjoy having Leo around. Instead, they spend the evening celebrating a new revelation from Kate: it's their anniversary. The next day, Leo discovers condoms. He assumes the worst, but after confronting Kate, Theresa takes the blame, stating she was having an affair. Leo and Kate decide to renew their vows.

Meanwhile, Leo's family is having a memorial service for him when a picture depicting a chicken fight involving Leo is presented. Mr. Montenegro realizes the lie he's been told and heads off to find Leo. When he gets to Kate's house, Leo's memory returns when he sees him. Hurt and angry, he leaves to return to his yacht. The girls tearfully run after him and plead for him to stay.

Kate decides to go after Leo, and she and the girls rush to the pizza place to borrow Bobby's boat to chase after the yacht. Meanwhile, Leo has become aware of how selfish and pretentious his life was before meeting Kate and the girls. He realizes he wants to be with them and has the captain turn the boat around. Mr. Montenegro attempts to stop him, but Sofia interrupts the dispute and reveals how Magda deceived everyone by faking Leo's death in order to take over the company. Three horn blasts are heard, and Leo rushes out onto the deck to find Kate and the girls nearby. Kate calls out "Arturo! Arturo!" and Leo responds by yelling "Catalina! Catalina!", a reference to a story Leo told Kate. After realizing his father has resumed course, Leo jumps into the water. Kate does the same as the two swim to each other and share a kiss. Leo dismisses threats from his father, who in the process decides to name Sofia as his new successor.

Leo returns to a life with Kate and the girls. Leo's former employee, Colin, arrives to offer his service as a nanny. After telling him they can't afford him, he mentions that Sofia sent him to remind Leo that he still legally owns the yacht, worth $60 million. Kate and Leo marry aboard the yacht, and friends and family toast the newlyweds during the end credits.

In March 2017, it was announced that Anna Faris and Eugenio Derbez will star in a re-imagining of the original 1987 film with Rob Greenberg and Bob Fisher co-directing. The main roles are reversed from the original film. Derbez will portray a wealthy man who falls off of his yacht and is found by Faris' character, a single mother who convinces him that he is her husband. Filming began in Vancouver in May 2017. Eva Longoria joined the cast that month.

In the United States and Canada, Overboard was released alongside Tully and Bad Samaritan, and was projected to gross around $12 million from 1,623 theaters in its opening weekend. The film made $4.8 million on its first day, including $675,000 from Thursday night previews, an improvement from the $450,000 made by Derbez's How to Be a Latin Lover the year before. It went on to debut to $14.8 million, finishing second behind holdover Avengers: Infinity War; like Derbez's other films, Latinos made up a predominant amount of the audience (41%). It fell 31% to $10.1 million in its second week, dropping to fourth behind Avengers: Infinity War ($64.8 million), Life of the Party ($18.2 million) and Breaking In ($16.5 million).

On Rotten Tomatoes, the film has an approval rating of 25% based on 80 reviews, and an average rating of 4.2/10. The website's critical consensus reads, "Overboard makes poor use of the ever-charming Anna Faris – and chooses questionable source material – to offer a remake that fails to clear the fairly low bar set by the original." On Metacritic, the film has a weighted average score of 42 out of 100, based on reviews from 27 critics, indicating "mixed or average reviews". Audiences polled by CinemaScore gave the film an average grade of "A–" on an A+ to F scale, while PostTrak reported filmgoers gave it an 83% overall positive score.

Variety's Owen Gleiberman wrote, "Overboard has been made with enough bubbly comic spirit and skill that the gender switch turns out to be a smart move, from both an entertainment and commercial vantage." Conversely, Johnny Oleksinski of the New York Post wrote "Hollywood isn't just churning out crummy remakes of great films anymore — now it's doing awful remakes of mediocre films. For evidence, see Overboard. Or, rather, don't."