watch 00:59
The Loop (Movies)
Do you like this video?
Overlord 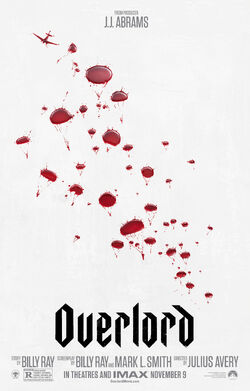 The film was released on November 9, 2018 by Paramount Pictures.

On the eve of D-Day, a paratrooper squad is sent to destroy a German radio tower in an old church; however, their plane is shot down before they can reach their target, leaving only five apparent survivors, Corporal Ford and privates Boyce, Tibbet, Chase and Dawson. Dawson, who wants to publish a book of his exploits during the war when he returns home, is suddenly killed by a mine as they try to reach the village.

While approaching the village, the surviving soldiers are discovered by Chloe, a French woman scavenging for resources, who agrees to take them into the village where the radio tower is located. The soldiers learn that Chloe lives with her 8-year-old brother Paul and her aunt, who has been disfigured by Nazi experiments taking place in the church. The soldiers hide in the attic when a Nazi patrol performs a routine inspection, then SS Hauptsturmführer Wafner attempts to rape Chloe. Boyce, being an idealistic new recruit, cannot ignore this and interrupts the Nazi officer, forcing the soldiers to take him prisoner. Tibbet and Chase depart to check the scheduled rendezvous site in case other members of their squad survived, while Boyce leaves to join them after he becomes disgusted with Ford's brutal interrogation of Wafner.

Attempting to reach the rendezvous point, Boyce witnesses the Nazis burning disfigured village residents after taking them out of a rear exit to an underground laboratory beneath the church, but he is nearly caught by a dog and forced to take refuge in a truck carrying the bodies of some of the other paratroopers. Once inside the base, Boyce escapes and learns that there are various experiments taking place in that lab, based around a mysterious liquid compound the Nazis discovered under the church. Boyce takes a syringe containing the serum and rescues Rosenfeld, another member of the paratrooper squad who was captured by the Nazis and was about to be subject to further tests, escaping the church.

Back at the attic, Boyce reveals the existence of the lab, but Wafner refuses to explain what the serum does. As the squad prepare to assault the church, Wafner attempts to escape, fatally shooting Chase in the process, driving Boyce to use the serum on Chase after his death. The serum restores Chase to life, but he immediately begins to mutate and turns hostile, even surviving being shot multiple times in the chest by the panicked Ford, forcing Boyce to pulverize Chase's head to stop him. Wafner confirms that the compound recovered from under the castle has the ability to reanimate the dead, musing that "a thousand year Reich needs thousand year soldiers". As Ford attempts to assure Boyce that Chase was dead after he was injected with the serum, a patrol responding to the carnage arrives, and a shootout erupts where the patrol is killed and Ford blows half of Wafner's face off. Wafner escapes with Paul as a hostage and back at the lab, injects himself with two dosages of the serum.

With time running out until the deadline when the radio tower must be destroyed, Boyce convinces Ford that destroying the laboratory has to be their priority. While Rosenfeld and Tibbet create a distraction at the rear entrance, Ford, Boyce and Chloe enter the base through the waterway Boyce previously used to escape. Boyce and Ford plant the explosives while Chloe rescues Paul. Chloe is briefly attacked by another test subject, but she is able to get Paul to safety and incinerates the subject with a flamethrower, while Boyce kills Doctor Schmidt, the scientist leading the experiments, in a confrontation. Ford is attacked by Wafner. When Boyce manages to distract Wafner, the injured Ford injects himself with another syringe containing the serum, allowing him to force Wafner down the pit where the compound was discovered, he then forces Boyce to leave him behind and finish setting off the dynamite, Ford certain that neither side can be trusted with the power of the serum.

In his report Boyce credits Ford for the decision to plant the bombs inside the church. The commanding officer questions Boyce regarding rumors of an underground lab under the church. Boyce, sharing Ford's view, denies seeing anything worth digging up. The officer seemingly accepts his story and informs him that they will be reassigned to Charlie Company as the war continues.

The story for the film was conceived by J. J. Abrams and screenwriter Billy Ray, with Ray penning the script. Paramount Pictures acquired the film in 2017, and Mark L. Smith was brought in to polish the script. On February 1, 2017, Bad Robot Productions and Paramount Pictures announced that Julius Avery would direct the film. On January 18, 2018, the film was initially reported as being the fourth installment in the Cloverfield film series, though Abrams denied this at CinemaCon on April 25, 2018.

The official motion picture soundtrack was released on digital only on November 9, 2018 by Paramount Music Corporation. The soundtrack was composed by Australian singer-songwriter and film composer Jed Kurzel, known for his previous work on the sci-fi film Alien: Covenant. This film is Kurzel's second collaboration with director Julius Avery, having previously worked together on Son of a Gun. Playing over the film's credits is the song Bridging the Gap by the rapper Nas, though this does not appear on the soundtrack.

Footage premiered at CinemaCon in April 2018, and the first trailer was released on July 18, 2018. The film premiered at Fantastic Fest 2018 on September 22. The primary theatrical poster for the film was released on September 12, 2018 featuring blood spatters on a white backdrop which represent the paratroopers in the film, the poster also won the IMP Award for best poster of 2018.

The film was released on DVD and Blu-ray on February 19, 2019 and was available on Digital HD from Amazon Video and iTunes on February 18, 2019.

Overlord grossed $21.7 million in the United States and Canada, and $20 million in other territories, for a total worldwide gross of $41.7 million, against a budget of $38 million.

The film was released alongside The Girl in the Spider's Web and The Grinch in the United States and Canada, and was projected to gross $8–13 million from 2,859 theaters in its opening weekend. It made $3 million on its first day, including $900,000 from Thursday night previews. It went on to debut to $10.1 million, finishing third at the box office. The film fell 62% in its second weekend to $3.9 million, finishing eighth.

On Rotten Tomatoes, the film holds a rating of 81% based on 209 reviews and an average rating of 6.72/10. On Metacritic, the film has a weighted average score of 60 out of 100 based on 28 critics Audiences polled by CinemaScore gave the film an average grade of "B" on an A+ to F scale, while PostTrak reported filmgoers gave it three out of five stars. 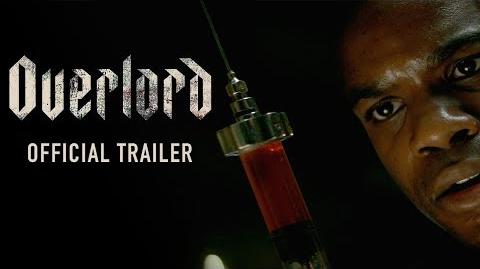 Retrieved from "https://movies.fandom.com/wiki/Overlord_(2018)?oldid=263755"
Community content is available under CC-BY-SA unless otherwise noted.