Start a Wiki
watch 01:21
The Loop (Movies)
Do you like this video?
Pacific Rim 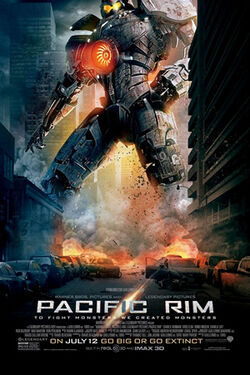 Directed By
Guillermo del Toro
Produced By
Written By

Pacific Rim is a 2013 American science fiction film directed by Guillermo del Toro and written by del Toro and Travis Beacham. The film is set in a near future where soldiers piloting giant robots battle against invading giant monsters who have mysteriously risen from beneath the ocean. Del Toro has said the film will be "a beautiful poem to giant monsters".[1]

In the near future, giant monsters identified as "Kaiju" arise from a crevice in the Pacific Ocean, resulting in a war which takes millions of lives and quickly consumes humanity's resources. To combat this new threat, a special type of weapon is designed: massive robots, known as Jaegers, which are controlled simultaneously by two pilots whose minds are locked in a neural bridge. As time passes, even the powerful Jaegers prove almost defenseless in the face of a relentless enemy. On its last stand and on the verge of defeat, the remaining defending forces of mankind have no choice but to turn to two unlikely heroes—a former pilot (Charlie Hunnam) and an untested trainee (Rinko Kikuchi)—who are teamed to pilot a legendary but seemingly obsolete Jaeger from the early trials of the mechanical titans. Together, they must stand as the human race’s last hope against the mounting apocalypse.[2]

Retrieved from "https://movies.fandom.com/wiki/Pacific_Rim?oldid=184277"
Community content is available under CC-BY-SA unless otherwise noted.