watch 03:27
Wiki Targeted (Entertainment)
Do you like this video?
Play Sound
Paddington 2 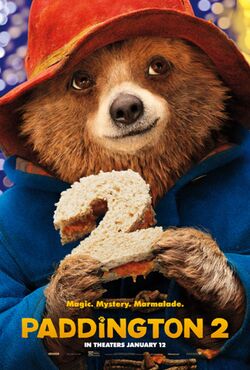 Paddington 2 is a British-French family-comedy film directed by Paul King, co-written by him and Simon Farnaby, and produced by David Heyman. It is the sequel to Paddington (2014). The film stars Hugh Grant, Brendan Gleeson, Hugh Bonneville, Sally Hawkins, Julie Walters, Jim Broadbent, Peter Capaldi, Madeleine Harris, Samuel Joslin, and the voices of Ben Whishaw and Imelda Staunton. Production began in October 2016. The film was released on January 12, 2018 in the United States.

The film is the highest rated film of all-time on Rotten Tomatoes.[1]

Paddington, having settled with the Brown family in Windsor Gardens, has become popular in his community. He sees a unique pop-up book in Mr. Gruber's antique shop, and performs several odd jobs to purchase it as a present for his aunt Lucy's 100th birthday. When the book is stolen, it is up to him and the Browns to apprehend the thief.

In April 2015, David Heyman, the producer of Paddington (2014), confirmed that he would produce a sequel to the film.[5] It was also announced that Paul King would return to direct and co-write with Simon Farnaby.[6]

In June 2016, Whishaw confirmed that StudioCanal has plans for a third Paddington film.[10]

Retrieved from "https://movies.fandom.com/wiki/Paddington_2?oldid=162001"
Community content is available under CC-BY-SA unless otherwise noted.