Pain & Gain is a 2013 action comedy film written by Christopher Markus and Stephen McFeely and directed by Michael Bay. The film is based on a 1999 series of Miami New Times articles by investigative journalist Pete Collins about "a couple of Florida steroid-abusing knucklehead bodybuilders who become criminals involved in an extortion ring and a kidnapping plot that goes horribly awry." The film is scheduled for a release date of April 26, 2013.

Based on a true story, "Pain & Gain" follows a group of bodybuilders who engaged in a campaign of kidnapping, extortion and murder in Florida. 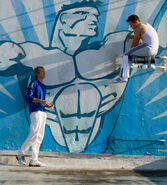