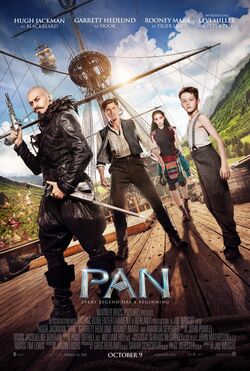 Pan is a 2015 fantasy film directed by Joe Wright. It stars Hugh Jackman, Garrett Hedlund, Rooney Mara, Amanda Seyfried, and Levi Miller as the titular character. It is an origin story of Peter Pan and Captain Hook. It was released in the United States on October 9, 2015, and in the United Kingdom on October 16, 2015.

The story of an orphan who is spirited away to the magical Neverland. There, he finds both fun and dangers, and ultimately discovers his destiny -- to become the hero who will be forever known as Peter Pan.[1]