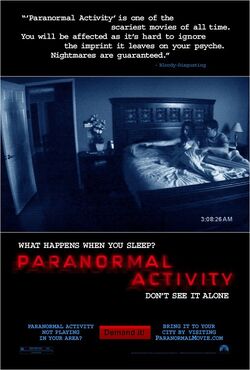 Paranormal Activity is a 2007 American supernatural horror film directed by Oren Peli. The cast of the film consists of Katie Featherston and Micah Sloat.

It premiered at Screamfest on October 14, 2007. It was released in the United States on September 25, 2009, by Paramount Pictures. In 2010, a prequel film was released, titled Paranormal Activity 2.