Paranormal Activity: The Marked Ones

View src
watch 01:33
House of the Dragon Trailer - The Loop
Do you like this video?
Play Sound
Paranormal Activity: The Marked Ones 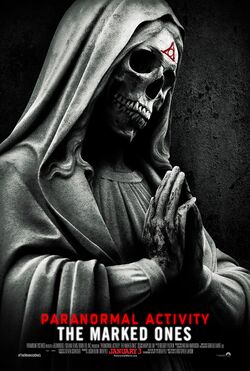 Paranormal Activity: The Marked Ones is a latino spin-off of the film series Paranormal Activity. The film is directed by Christopher Landon and stars Molly Ephraim, Richard Cabral and Carlos Pratts. It was released on January 3, 2014 in the United States.

When his neighbor dies under mysterious circumstances, Jesse and his best friend Hector decide to investigate her house. The next morning he wakes up with a strang mark on his arm. After being "marked," Jesse begins to be pursued by mysterious forces while his family and friends try to save him.