Edit
watch 01:23
Wiki Targeted (Entertainment)
Do you like this video?
Play Sound
Paul 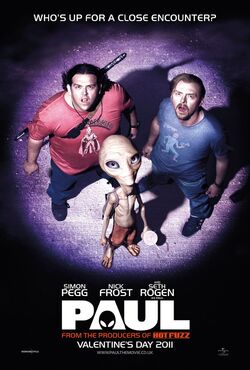 Graeme Willy and Clive Gollings are British comic book enthusiasts and best friends who travel to the United States to attend the annual San Diego Comic-Con, and to take a road trip through the Southwestern United States to visit sites significant to UFO lore. While driving on a remote desert highway at night, after a tense situation with some rednecks in a diner, Graeme and Clive observe a car driving erratically and then crashing. They stop to investigate and offer assistance to the driver, who turns out to be an alien named Paul, whom Graeme agrees to give a ride. Later, Special Agent Zoil of the FBI arrives at the car-crash site and informs his unseen female superior, "the Big Guy", that he is closing in on Paul. She sends two inept rookies, Haggard and O'Reilly, to assist Zoil.

Clive remains paranoid over Paul's intentions, considering his appearance evidence of a conspiracy theory, until Paul tells them that the government spoon fed his image to the public to keep them from panicking if anyone encounters his race. They later camp at an RV park run by two Christian fundamentalists, one-eyed Ruth Buggs and her father Moses. The next day, when Ruth discovers Paul, the three have no choice but to take her with them. During an argument, Paul convinces Ruth to question her beliefs and uses his healing power to cure Ruth's blinded eye. The fugitives stop at a bar and Ruth tries to call her father, but Zoil intercepts the call. She is accosted by the rednecks from the diner and a bar fight ensues. The group escapes when Paul terrifies the rednecks into fainting. Later, at another RV park, Ruth is questioned by Agent Zoil, but feigns ignorance and escapes. Frustrated, Zoil orders Haggard and O'Reilly to return to base but they go behind his back and insist on catching the alien on their own.

The group soon arrives at the house of a woman named Tara, who rescued Paul when he crashed on Earth 60 years ago and accidentally killed her dog (after whom Paul was named) in the crash. As a result of no one believing her story, she has spent her life as a pariah. As she makes tea for her visitors, Haggard, O'Reilly and Zoil surround the house. The fugitives flee, but O'Reilly shoots at them, igniting gas from Tara's stove and destroying her house with O'Reilly inside it. Haggard pursues and catches up to the RV but due to an error in judgement, drives off a cliff and is killed. Zoil reassures the Big Guy that he will have Paul within the hour, but she is tired of waiting and informs Zoil that she has ordered a "military response".

Paul, Graeme, Clive, Ruth and Tara arrive at Devils Tower National Monument, where they set off fireworks as a signal to Paul's mothership. A helicopter suddenly arrives with agents and the Big Guy. Zoil then appears and initiates a stand-off, unexpectedly shooting the Big Guy's agents, before being wounded by the Big Guy. It is revealed that Zoil is Paul's friend and was attempting to aid his escape under the guise of capturing him. During the fight, Tara knocks out the Big Guy. Moses arrives unexpectedly and fires at Paul, but hits Graeme instead. Paul once again uses his healing powers, reviving Graeme in spite of the danger to himself. Graeme and Ruth admit their feelings for each other and kiss, but then the Big Guy regains consciousness and holds the group at gunpoint. Just as the Big Guy is about to kill them, she is crushed by the landing mothership. Paul says goodbye to his friends and offers Tara a chance to go with him, promising to give her a new life after ruining her childhood and accidentally killing her dog. The aliens go home as the humans wave them goodbye.

Two years later, Graeme, Clive, Ruth, Zoil and O'Reilly (who survived the explosion) are at another Comic-Con, where Graeme and Clive are promoting their new bestselling novel titled Paul.