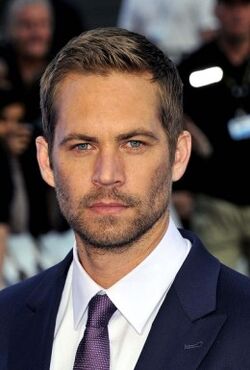 Paul William Walker IV (September 12, 1973 – November 30, 2013) was an American actor. He is best known for films such as She's All That, Varsity Blues, Into the Blue and The Fast and the Furious and the its sequels, reprising his role in the five others. The film Furious 7 was a tribute to him as he died during production of the film.

Walker was born in Glendale, California, and was the son of Cheryl (née Crabtree), and Paul William Walker III. The oldest of five siblings, Walker was raised primarily in the Sunland community of Los Angeles and attended high school in the San Fernando Valley, graduating from Sun Valley's Village Christian School in 1991. After high school, Walker attended several community colleges in Southern California.

Walker began his small screen career as a toddler, when he starred in a television commercial for Pampers. He began modeling at the age of two and began working on television shows in 1985, with roles in shows such as Highway to Heaven, Who's the Boss?, The Young and the Restless, and Touched by an Angel. That year he starred in a commercial for Showbiz Pizza.[1] Walker's film career began in 1986, with the horror/comedy film Monster in the Closet. In 1987 he appeared in The Retaliator (aka Programmed to Kill), a low budget cyborg action film, with Robert Ginty. He and his sister Ashlie were contestants on a 1988 episode of the game show I'm Telling!; they finished in second place. In 1993 he played Brandon Collins on the CBS soap opera The Young and the Restless. He and his co-star Heather Tom, who played Victoria Newman, were nominated for Outstanding Lead Actor and Actress in a soap opera at the Youth in Film Awards. In 1998, Walker made his feature film debut in the comedy Meet the Deedles, which finally gained him fame. This subsequently led to supporting roles in the movies Pleasantville (1998), Varsity Blues (1999), She's All That (1999), and The Skulls (2000).

In 2001, Walker's breakthrough role arrived when he starred opposite actor Vin Diesel in the successful action film The Fast and the Furious, the first film in the franchise. The film established Walker as a notable film star and leading man and led to his reprise of the role in the 2003 sequel 2 Fast 2 Furious. He continued his career with leading roles in films such as Joy Ride (2001), Timeline (2003), and Into the Blue (2005). He had a supporting role in Clint Eastwood's adaptation of Flags of Our Fathers (2006).

Walker then starred in the crime thriller Running Scared and Walt Disney Pictures' Eight Below, both released in 2006. Eight Below garnered critical-acclaim and opened in first place at the box office, grossing over US$20 million during its first weekend.[2] During the filming of Running Scared, director Wayne Kramer stated that "[Walker] is that guy on some level"[3] when comparing Walker with his character in the movie, Joey Gazelle. Kramer continued on to say that he "loved working with [Walker] because as a director he's completely supportive of my vision of what the film is. And even better, he's completely game for it."[3]

The Coty Prestige fragrance brand Davidoff Cool Water for Men announced in January 2011 that Walker was going to be the new face of the brand as of July 2011.[6] He reprised his role in the fifth installment of The Fast and the Furious series, Fast Five (2011), and again in Fast & Furious 6 (2013). For this film, he won the 2014 MTV Movie Award as best on-screen duo, with Vin Diesel. He was part of an ensemble cast in Wayne Kramer's Pawn Shop Chronicles (2013), which was Walker's last film released before his death.

Shortly after his death, the Hurricane Katrina based film Hours, which he had completed earlier in 2013, was released on December 13, 2013. He had also completed the action film Brick Mansions, a remake of the French film District 13, which was released in April 2014. At the time of his death, Walker had been filming Furious 7, which was slated for release in July 2014. The film was completed by using his brothers Caleb and Cody as his body doubles/stand-ins, and CGI, and was released in April 2015.[7] Walker was also set to play Agent 47 in the video game adaptation Hitman: Agent 47, but died before production began.[8]