The story of a rebel and his bike.

Pee-Wee Herman loves his bike more than anything else in the world and refuses to sell it to his spoiled neighbor Francis Buxton. The bike is stolen while visiting Dottie at a bicycle shop called "Chuck's Bike-O-Rama", and Pee-Wee visits a psychic named Madame Ruby who tells him that the bike is hidden in the basement of the Alamo Mission in San Antonio, Texas. On the way there, he meets Simone, a waitress at a restaurant with a dream of living in Paris. Her jealous boyfriend Andy thinks Pee-Wee and Simone are romantically linked, which results in Andy trying to get Pee-Wee into a fight, but Pee-wee flees into a boxcar on a moving train. Making it to San Antonio, he finds that the Alamo has no basement. Disappointed, Pee-Wee visits a bar to use the telephone, but disturbs a biker gang after accidentally knocking over their motorcycles. Fearing they are going to kill him, Pee-Wee asks for one last request and he dances to "Tequila", also winning the respect of the bikers and their boss. The bikers give him one of their motorcycles, but Pee-Wee quickly crashes it through an advertisement sign, ending up in the hospital. There, he watches an interview and learns that his bike was donated to Kevin Morton, a child star who is currently filming a movie with the bike as a prominent plot device.

Pee-Wee enters Warner Bros. Studios in Burbank, California, disguises himself as a nun, and steals his bike back. In a wild chase scene, he flees from the Warner Bros. security staff through a variety of sets, causing havoc throughout the lot. Various actors and props, including a boat-shaped car, a Santa Claus sleigh, and a man in a Godzilla (Cleve Hall) costume, get swept into the chase. He also interrupts the shooting of a Twisted Sister music video for "Burn in Hell" from Stay Hungry. Using the gadgets on his bike when driving through the set of Tarzan and a western set, Pee-Wee manages to evade and fake out the guards and escape the studio. As he blissfully rides away however, Pee-Wee discovers a burning pet shop. After heroically saving all the animals, Pee-Wee faints on the sidewalk near the store's doorstep upon having to carry out the pet snakes just as the fire department and police department arrive. Though the fire department considers Pee-Wee to be a hero, the police decide to arrest him.

Pee-Wee is brought before a Warner Bros. studio executive who offers to buy the rights to Pee-Wee's story in exchange for dropping all charges and giving up their claim to his bike. Dottie is summoned into the office, bringing along Pee-Wee's beloved bicycle. He attends the premiere at his local drive-in theater, and it turns out to be a James Bond-style action film involving James Brolin and Morgan Fairchild fighting ninjas. Pee-Wee has a cameo appearance as a bellhop, with his voice dubbed over. After watching for a few minutes and outsmarting Francis, Pee-Wee decides to leave, having already lived the real story. Reunited with his bike, he rides away with Dottie, happily ever after. 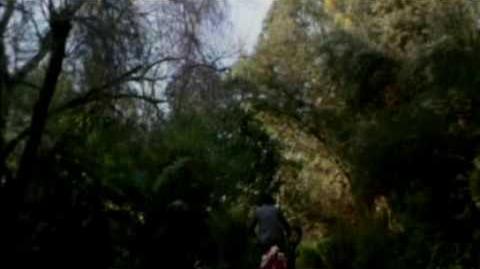